The problem of the Origin of the Carribean Plate

At the meeting on July 21st 2021 Dr Keith H.James (Honorary Fellow Geography and Earth Sciences, Aberystwyth University, Consultant Geologist) gave a very thought provoking talk entitled:The Problem of the Origin of the Carribean Plate in which he put forward his own model on it's origin.

geology is spread over many different countries (fig.1)
some areas are poorly studied (access, vegetation, weathering, lack of interest)
there are no spreading ridges or calibrated magnetic anomalies (save for the centre of the Cayman Trough)
the plate interior is poorly known
there is no regional grid of modern, deep-looking seismic data 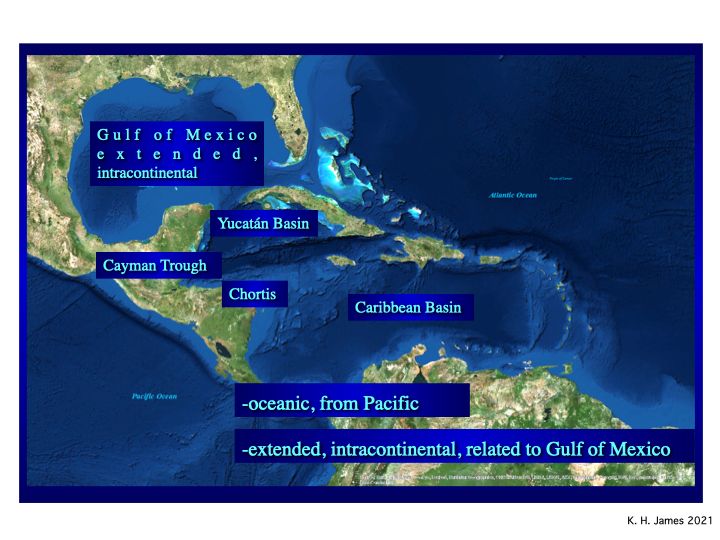 Caribbean geology is equivocal - there are two opposing models.

The dominant paradigm holds that the Caribbean Plate formed in the Pacific Ocean (e.g., Pindell & Kennan, 20091). It is therefore oceanic. It thickened to as much as 20 km, becoming the “Caribbean Large Igneous Province (CLIP) over the Galapagos “hotspot”. This collided with a roughly N-S trending, 1000 km long Pacific intra-oceanic arc, causing subduction polarity reversal, and drove the arc ahead of itself between N and S America (fig. 2). The arc became curved and extended to some 4000 km. As it collided with and accreted to N and S America it ceased activity. The Lesser Antilles arc is the active remnant of this arc. Chortis, a major continental block that forms the northwestern third of the Caribbean plate, rotated from SE Mexico to follow the CLIP into place. 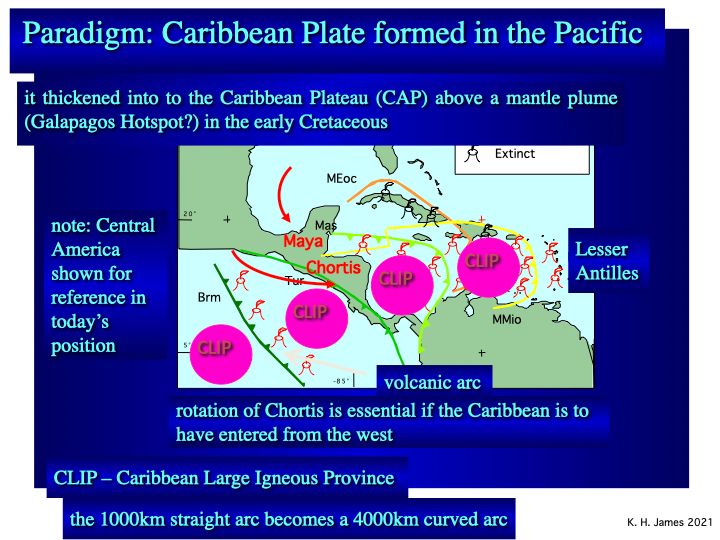 This model is incredibly complex1 and becomes increasingly so (4). It ignores data that deny it (2, 3). It prefaces most studies of the area, which begin with “it is well known that …..” and make no independent evaluation. There is no hydrocarbon potential.

It is impossible for a linear volcanic arc to become highly extended and curved. The segment supposedly accreted on Cuba alone is 1000 km long.

The CLIP is not a 20 km thick pile of basalt. DSDP drilling penetrated a few metres into the top of the “plateau”, calibrating a regional seismic Horizon B” as an upper Cretaceous dolerite.

The alternative is that the plate formed in place by intra-continental extension between N and S America (James, 2009, 2, 3). It shares history and geology with the Gulf of Mexico. This model is simple and accommodates all regional geology. 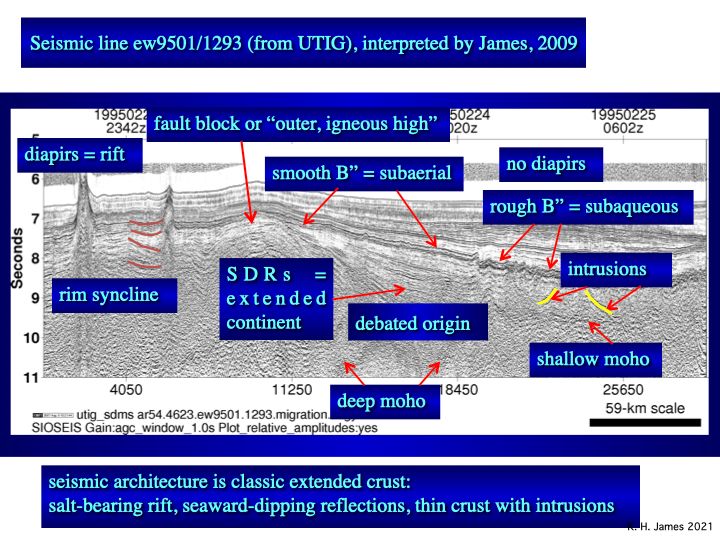 Chortis geology does not correlate with SE Mexico. The block manifests the regional tectonic trends of Middle America (James, 2002, fig. 3). It has not rotated. It has always been at the western end of the Caribbean and there was no gateway for the plate to enter.

Salt diapirs, misinterpreted as seamounts under the Pacific model, rise from below and lift Horizon B” (fig. 3). It is a single layer, not the top of a 20km thick pile. Thick, sub B” wedges (seaward-dipping reflectors or SDRs) repeat the geology of continental extension seen on Atlantic margins and in the Gulf of Mexico. They likely include Jurassic-Cretaceous carbonate reservoirs, similar to the very large sub-salt fields of Brazil´s offshore. The salt probably is Jurassic in age. Jurassic and Cretaceous source rocks are likely. There is outstanding hydrocarbon potential.

We know as much about the Caribbean-Yucatán basins today as we did about the North Sea in 1965. The basins are five times larger in area. While the Pacific model remains popular little progress will be made with understanding of the geology or the hydrocarbon potential.

1 Pindell, J. and L. Kennan, 2009, Tectonic evolution of the Gulf of Mexico, Caribbean and northern South America in the mantle reference frame: an update: In: James, K. H. M. A. Lorente and J. Pindell, (Eds.), The Origin and Evolution of the Caribbean Plate, p. 1-55.

4 Pindell, J., D. Villagómez, R. Molina-Garza, R. Graham and B. Weber, 2020, A revised synthesis of the rift and drift history of the Gulf of Mexico and surrounding regions in the light of improved age dating of the Middle Jurassic salt: In: Davison, I. et al. (Eds.), The Basins, Orogens and Evolution of the Southern Gulf of Mexico and Northern Caribbean, GSL Special Publication 504, p. 29-76.