Talk on Properties of Minerals by Bill Bagley and Michele Becker

At the last meeting, 16th October, committee members Michele Becker and Bill Bagley gave a talk on the Physical Properties of Minerals in Relation to their Internal Structure.

Michele began with a definition of a mineral i.e. a substance with the following criteria: Naturally occurring; solid at standard temperature and pressure ( with the exception of mercury); a specific chemical composition which varies within a very narrow range and has an ordered 3D array of atoms/molecules within it’s structure.

She then went on to give a basic overview on types of chemical bonds as the type and strength of these bonds along with the chemistry and geometrical arrangement of atoms of a mineral will determine it’s physical properties.

This was followed by a brief look at crystal structure. Crystal structure is a highly ordered repeatable structure. The simplest repeating unit in a crystal is called the Unit cell and each Unit cell is defined in terms of lattice points which is repeated in 3D to give the lattice structure. Symmetry and form of a crystal are determined by the shape of the unit cell. Each unit cell contains one or more different kinds of atoms joined to each other by chemical bonds. All unit cells have six sides - 3 sets of parallel faces though not necessarily perpendicular to each other. Basically there are 7 kinds of unit cell which differ in the relative lengths of their edges and the angles between them. These are cubic, hexagonal, trigonal, tetragonal, orthorhombic, monoclinic, triclinic.

This was followed by a look at some physical properties and how they are determined by mineral structure.

Habit and form - habit is the tendency for a mineral to repeatedly grow into characteristic shapes and is influenced by the atomic structure and the environment in which it grows.
Form - is similar to habit and may be defined as a solid crystalline object bounded by a set of flat faces related to one another by symmetry.

Hardness - is the ability of a mineral to be scratched. The test used is the Mohs hardness test which is a non-linear, ordinal scale of hardness. In this scale talc is the softest whilst diamond is the hardest.
The hardness of a mineral is dependent on the packing pattern, the electrostatic charge on the ion and the distance between. The presence of water also changes hardness.

An example can be seen between diamond and graphite both consisting of carbon. Diamond measures 10 on Mohs scale whilst graphite is 1 on the scale. This is due to their internal structure. In diamond each carbon atom is bonded to four others in a tetrahedral shape and forms a highly interlocking structure. In graphite each carbon is linked to three other carbons in hexagonal sheets which look like chicken wire. These sheets are separated by Van der Waal bonds which are very weak.

Cleavage - Is a plane of structural weakness along which a mineral is likely to split. This is due to either weaker bond strength or greater lattice spacing. Cleavage is usually parallel to potential crystal faces. Not every mineral shows cleavage eg. quartz has no cleavage it only fractures which is related to a greater bond strength in quartz. Some minerals have one direction of cleavage like biotite and muscovite mica whilst others may have two ( eg.feldspars), three (eg. calcite) and even four ( fluorite)
Cleavage can be described as: perfect, distinct, difficult, imperfect. or indistinct. 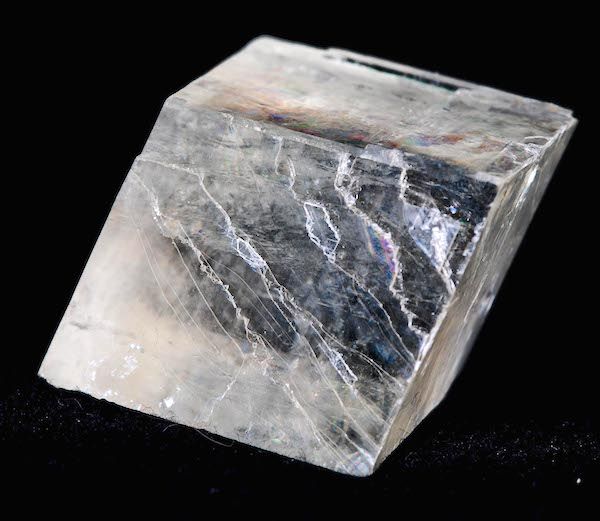 Calcite has three directions of cleavage not at 900 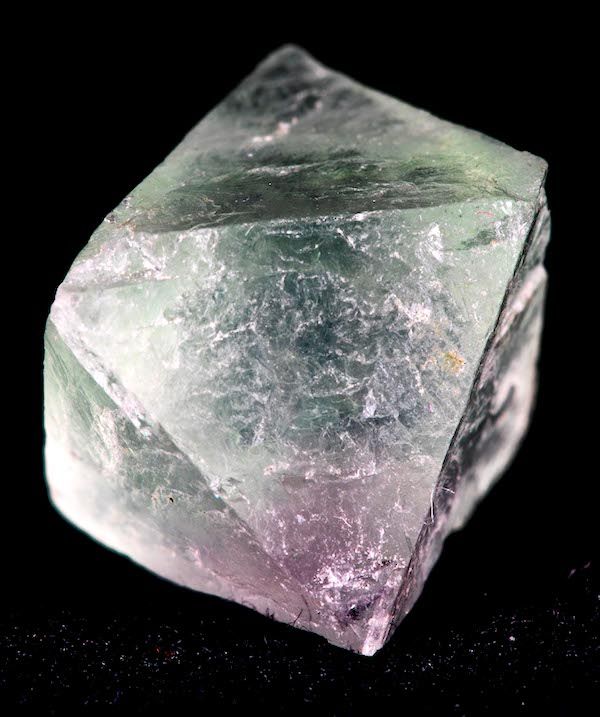 Fluorite has four directions of cleavage

Density/specific gravity - is dependent on the chemical composition and crystal structure. Heavier atoms/molecules, closer the packing and stronger the bond strength the greater the density. eg. diamond has a SG of 3.5, graphite 2.5.
Also in isostructural compounds there is a direct relationship to the mass of atoms for example:
Olivine - varies from forsterite - MgSiO4 - SG 3.22 to fayalite- FeSiO4 - SG 4.41

In the second half of the talk Bill went on to describe colour in minerals. This commenced by a short introduction to visible light.
White light is defined as the complete mixture of all of the wavelengths of the visible spectrum and forms just a small part of the electromagnetic spectrum.The properties of light include refraction, reflection, interference and diffraction.

How we see colour is dependent on the fact that some wavelengths are absorbed by an object whilst others are reflected. These reflected wavelengths enter the eye of the viewer and are interpreted as colour. For example a leaf appears green as all colours of the spectrum except green are absorbed, green is reflected and perceived by the viewer.

He then went on to discuss the causes of colour in minerals. 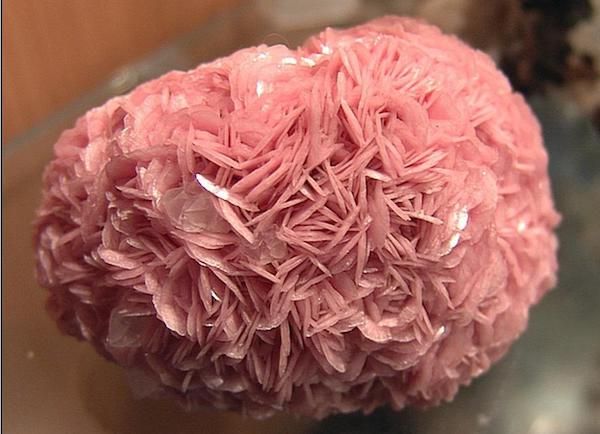 An allochromatic mineral is one that is coloured by impurities that are not part of it’s chemical composition for example the purple of amethyst is due to the presence of small amounts of iron in quartz. 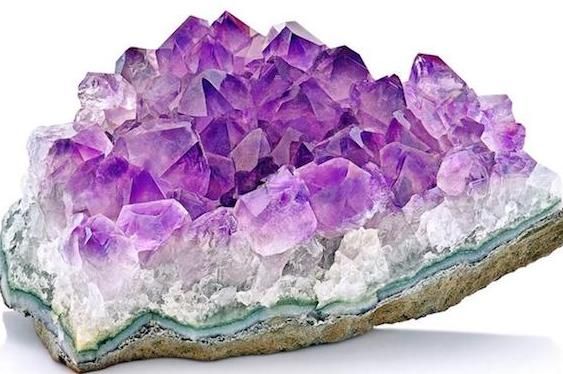 The elements that lead to the production of colour are usually those ions from the first row of the transition elements ( Ti to Cu). These ions have electrons in the five 3d orbitals. In the crystallographic sites found in minerals, the 3d orbitals split into different energies. Visible light interacts with these electrons and causes them to be excited to higher energy orbitals. The wavelengths that cause these transitions are subtracted from the incident light resulting in colour.

Charge transfer is another means of eliciting colour. This is the result of charge change for example between two metals. These metals can exist at different valence states eg. iron and titanium. The absorption of light energy causes an electron to transfer from one ion to the other; it then returns to the original ion. For example, on absorption of light, the pair iron +2/titanium +4 becomes iron +3/titanium +3, resulting in the blue colour in sapphire.

Hole centres is a third means of colour generation. This can be illustrated by smokey quartz. In quartz some silicon ions which have a valence state of +4 may be replaced by aluminium ions with a valence state of +3. electrical neutrality will be maintained by the presence of sodium or hydrogen ions, although this will weaken the forces on the electrons of oxygen atoms in the structure. An input of external radiation can thus remove an electron from the oxygen leaving a hole, and now different energy levels become available to the remaining unpaired electron on the oxygen. Thus clear quartz will become smokey brown in colour. If the crystal is heated the electron can return to its original location and the colour generated by the above will be removed. 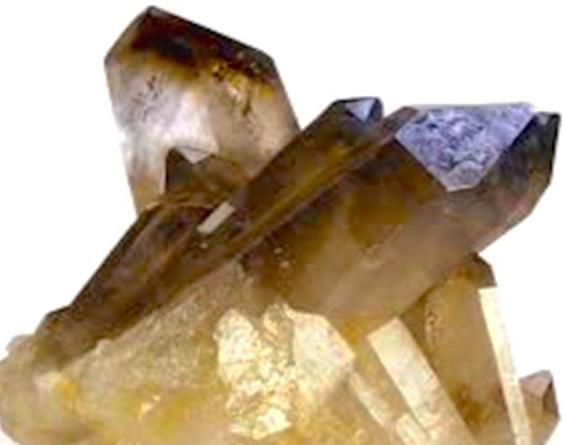