As covid gradually recedes, the club has restarted its annual weekend away field trips. This year we were in Suffolk being guided by Tim Holt-Wilson. We stayed around Saxmundham, and journeyed north on Saturday and south on Sunday.
Tim gave us an introduction to Suffolk geology on the Friday evening. The oldest beds we saw were the London Clay formation – Eocene marine mudstone at 52Ma. We also saw the Coralline Crag Formation (early Pliocene sandy, fossiliferous marine limestone around 4Ma) and the Corton Formation (glacial till and outwash deposits around 0.5Ma). 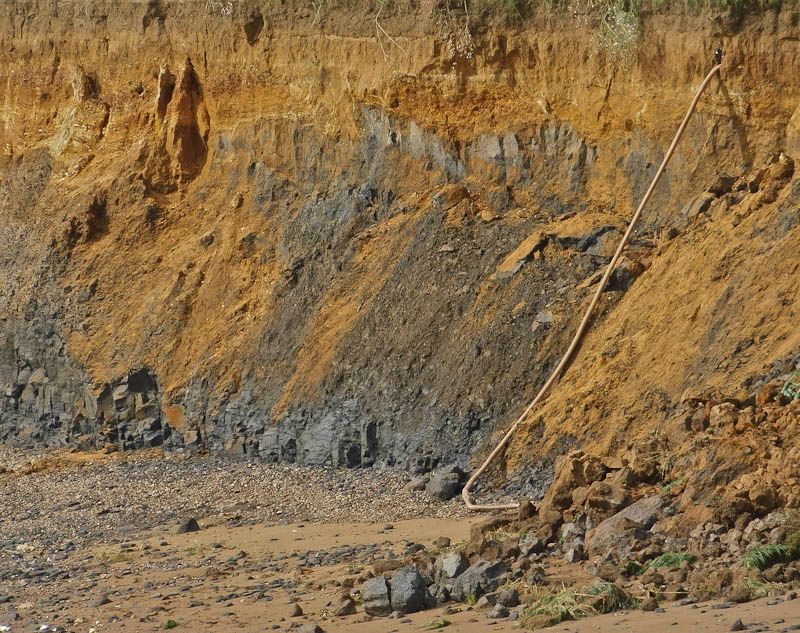 Bawdsey East Lane beach. The grey at the base of the cliff is the London Clay formation. The higher brown layer is the Coralline Crag formation. Extensive erosion is evident. The pipe dangling down is a field drainage pipe left exposed by rapid erosion.
There is 48Ma missing between these two beds; but the unconformity is not evident in the cliff face. The “rock” forming the wave-cut platform of the beach is actually London Clay – very slippery and treacherous at times. Many of the pebbles on the beach are actually rounded pieces of London Clay (scale is an A6 field notebook). 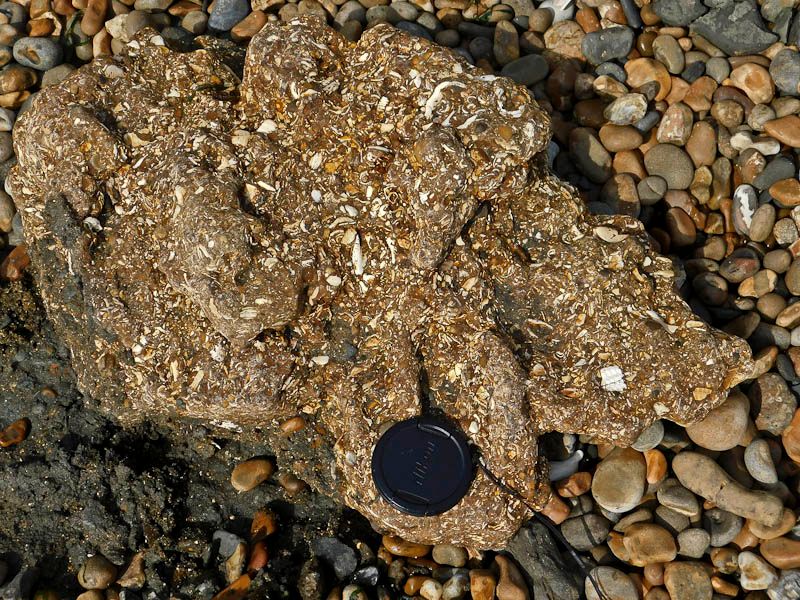 A piece of eroded coralline crag material on the beach showing numerous fossil fragments. Nearly all of the fossils are fragmented, so identification is difficult (scale is the camera lens cap) 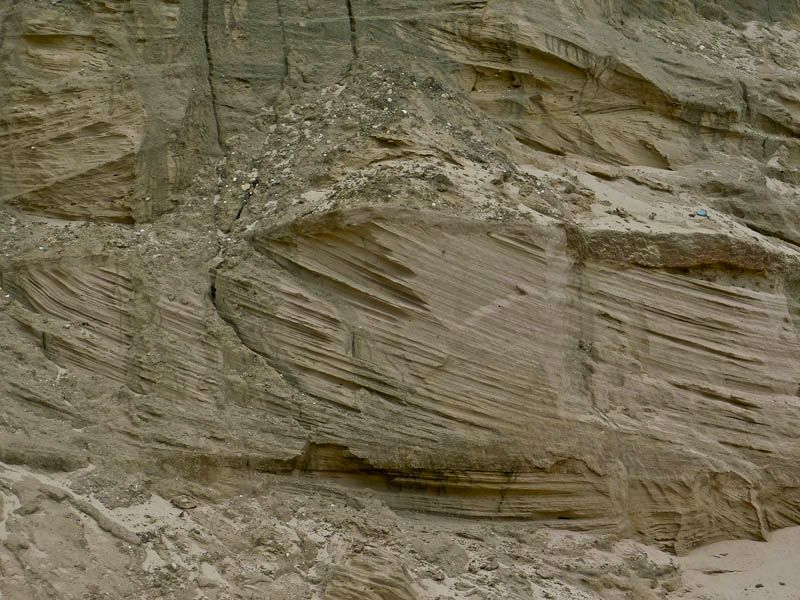 Cross bedding in the Corton Formation at Pakefield Cliffs

Suffolk was at the edge of the ice sheet in recent glaciations. During glacial times, there were three large rivers draining from higher ground further west across present-day East Anglia into the North Sea: one in the north arising from the south Pennines, a central one arising in the West Midlands and a southern one arising in the London area. These conveyed stones from these areas which are now found on East Anglian beaches. A wide variety of pebbles at Pakefield beach – these reflecting the draining from a wide area of the west Midlands, possibly as far as Wales. 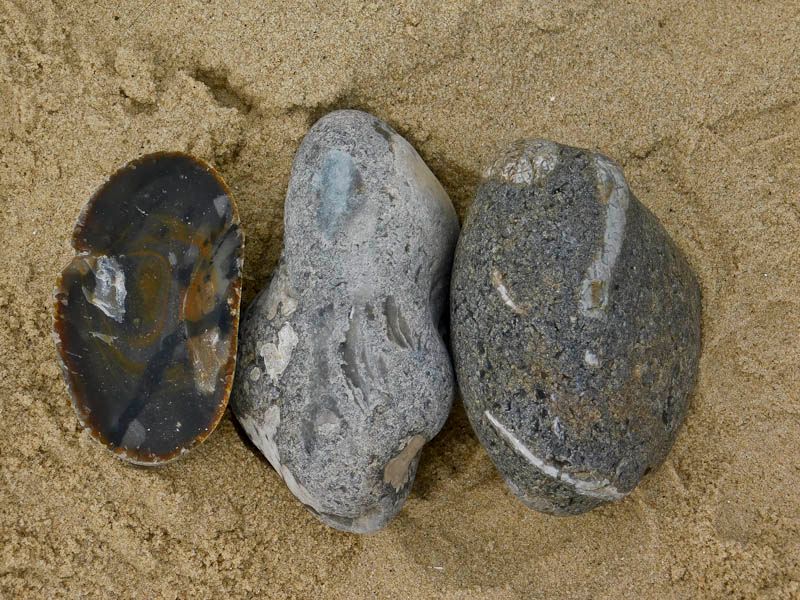 London flints on the beach at Benacre Broad.

Coastal erosion is occurring rapidly at many locations, although sand does move up and down the coast, and some areas show increased deposition. Dunwich was a major population centre in the Middle Ages, but erosion resulted in loss of >90% of the town, so only a small village remains today. We saw a fascinating model of Dunwich in the 12th century in the village museum with a yellow line half a kilometre inland representing the current coastline. 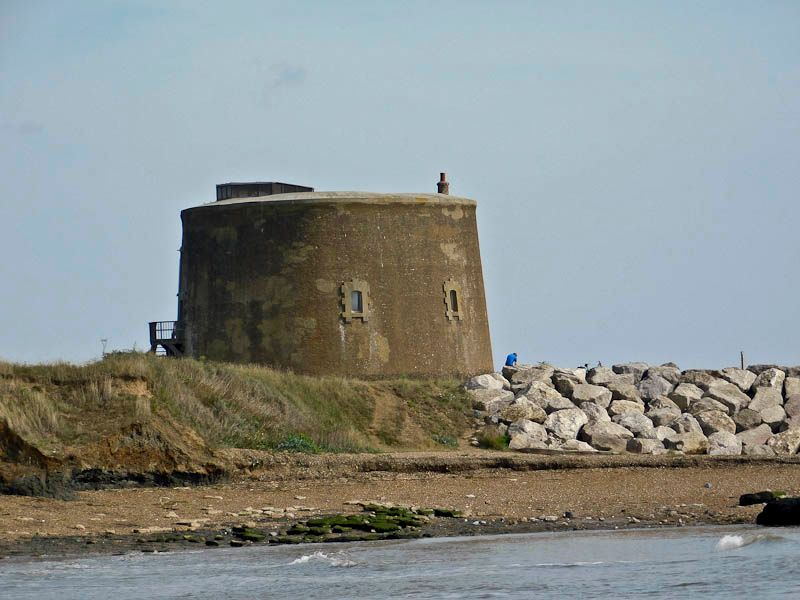 The Martello Tower at Bawdsey East Lane beach. These towers were built around the coast during the Napoleonic Wars to protect Britain. Now we have to protect them by installing rock armour to stop the sea eroding them away! A tree recently lost to coastal erosion at Shingle Street 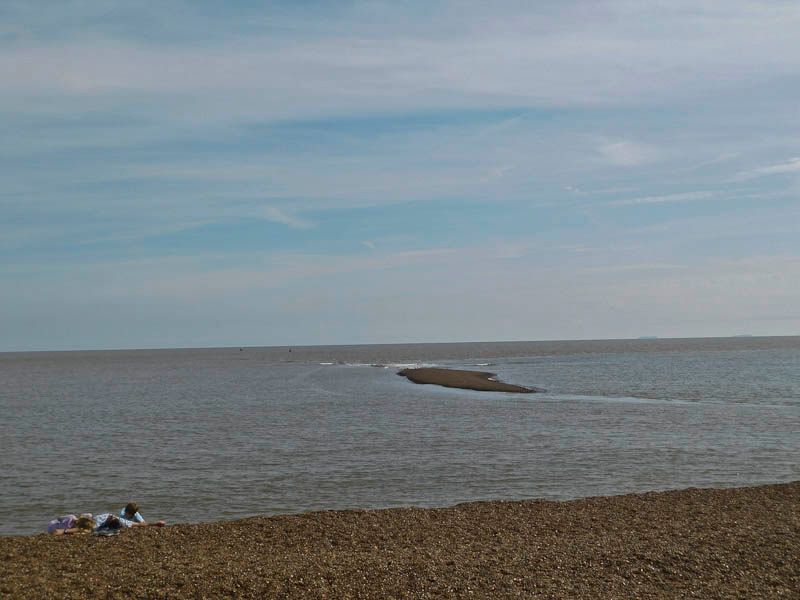 A sand bar at Shingle Street showing the deposition that occurs side-by-side with the coastal erosion.

One other feature of trade in the Middle Ages was that boats would come from many countries in Europe with local stones as ballast, then leave the stone as they loaded up their cargoes. Because there is virtually no building stone in Suffolk, these ballast stones would be incorporated in the walls of the churches and houses built at this time. 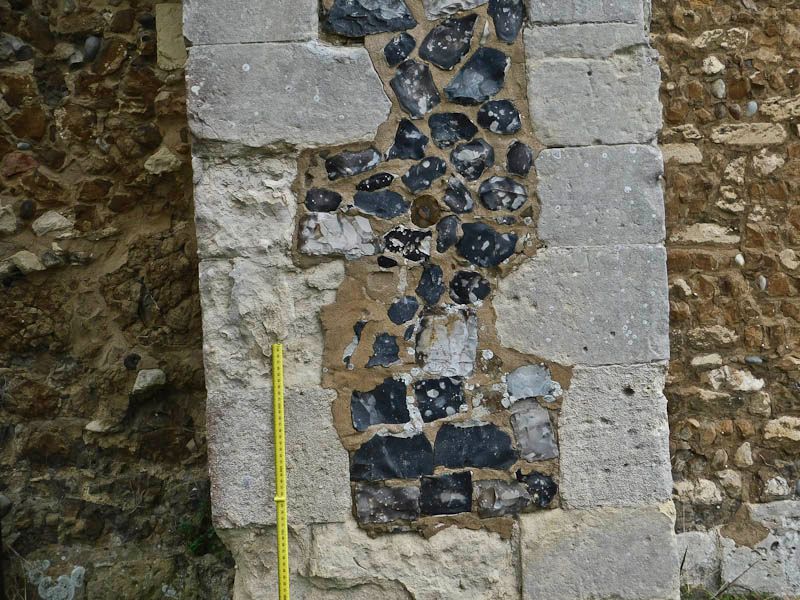 Flints incorporated into the wall of Orford Church. Look particularly at the second and third row up from the bottom 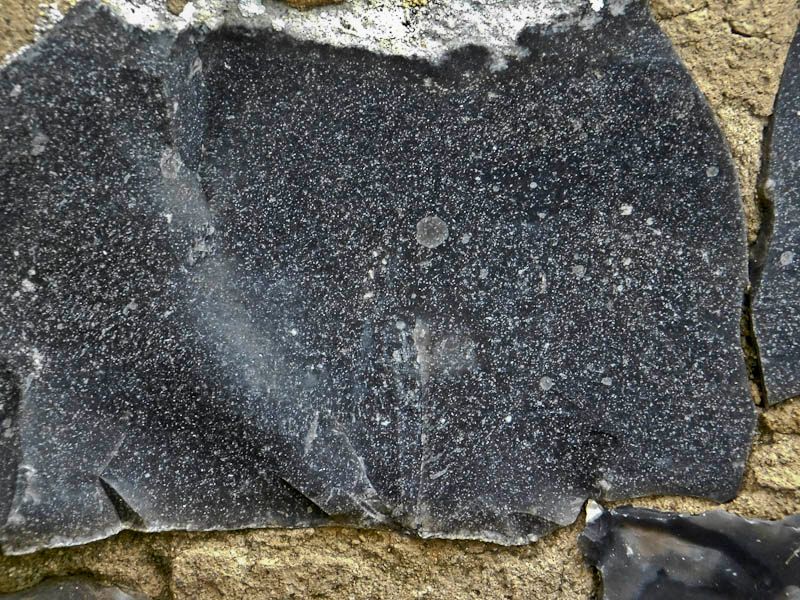 The second row up is formed of Swedish flints brought here as ship’s ballast. Note the “milky way” background 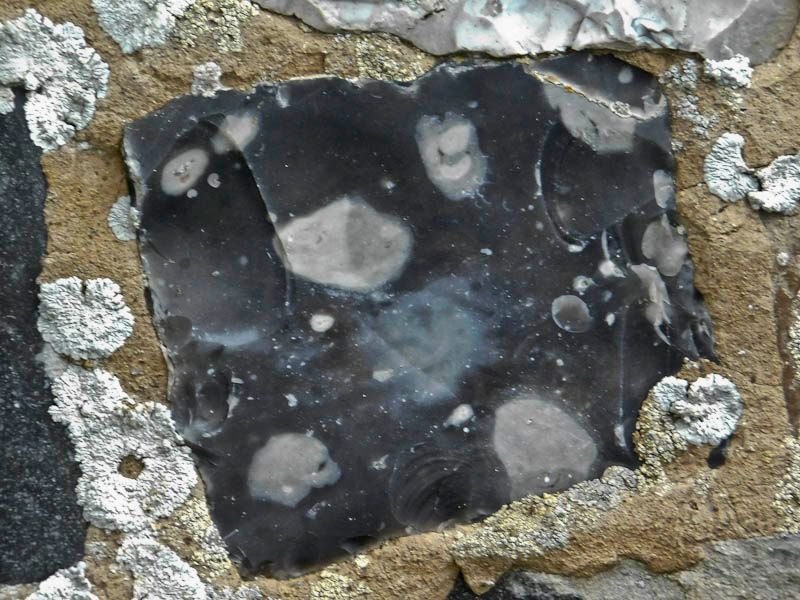 English flints in the third row up. Note the smooth glassy texture. 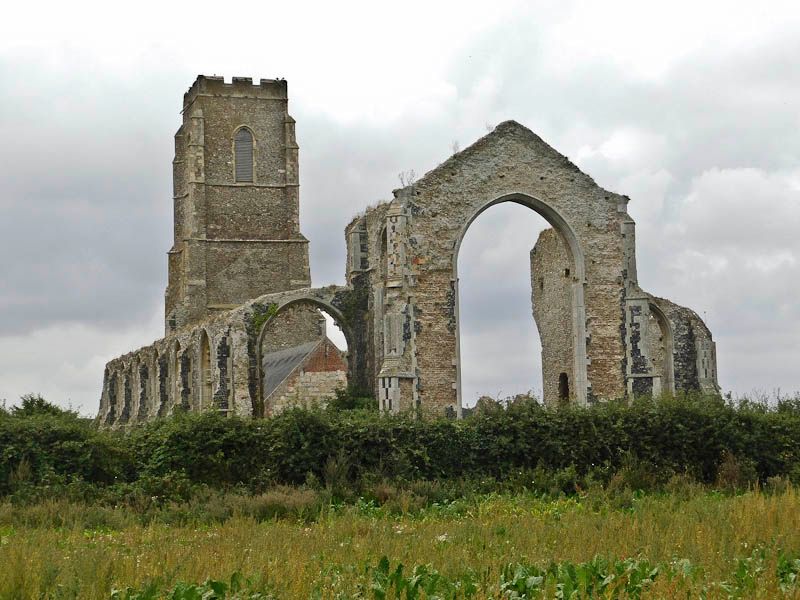 The Church of St Andrew at Covehithe. Originally a very large church, in 1672 the parishioners were given permission to knock most of it down and rebuild a much smaller church within it. The old church incorporates interesting building stones, many of which were re-used in the walls of the small church. 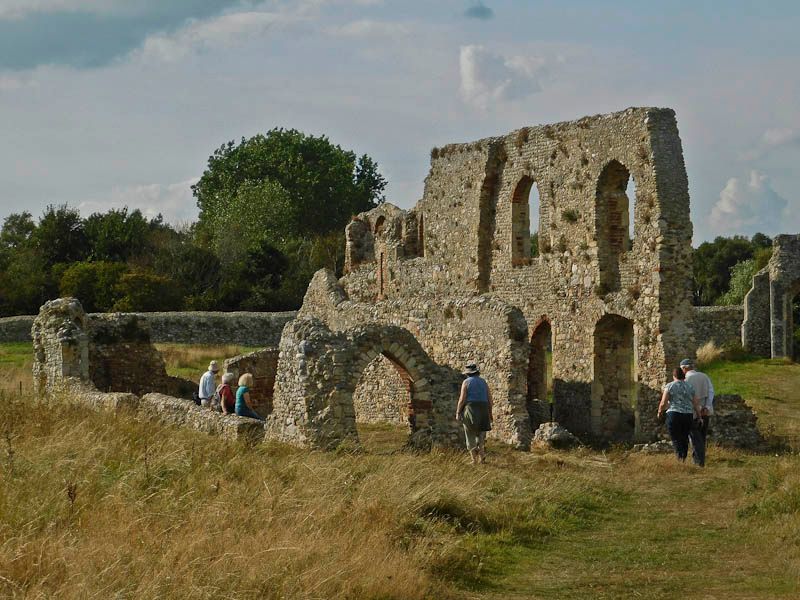 The old Franciscan monastery of Greyfriars at Dunwich. Tim Holt-Wilson (sitting far left) is going to show details of the building stones to members