Club members had a very enjoyable weekend with a combination of excellent weather, interesting geology and a knowledgeable guide, Sid Howells who is a geological and environmental education specialist. We started on the Friday evening with a summary of the geology and distribution of fact sheets from Sid.

On Saturday morning, we caught the coast path bus which took us to Clegyr Boia (SM 744252), a high point which gave us 360° visibility so we could see the features of the landscape and where we would be walking. We had a striking view over St David’s Cathedral which had been constructed within a glacial melt-water channel. 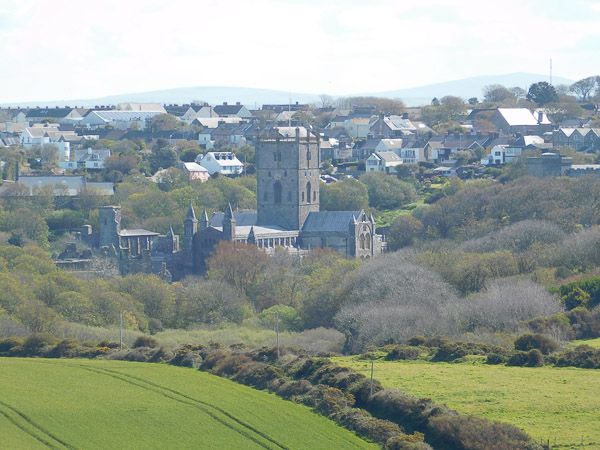 Melt-water channels are a particular feature of North Pembrokeshire geology with another one extending from Abereiddi to Porthgain which we saw on Sunday and Monday.
We then walked to the coast at Maen Bachau (SM 722241) and continued round the coast till we reached St Non’s Bay (SM 753242) at the end of the day. This gave us panoramic views of the bays, inlets and islands. We could not, however, get down to sea level except in a few areas – for the best views of Pembrokeshire geology, Sid informed us that we needed to paddle in by kayak!

The first thing we did at Maen Bachau was to look at the variety of pebbles on the beach. Most of the geological layers represented in Pembrokeshire were present there, as well as some from further afield. Photo 2 shows a pebble composed of the basal Cambrian Conglomerate, which outcrops at St Non’s Bay and elsewhere. (Sorry there is no scale – this pebble is about 8 inches across). 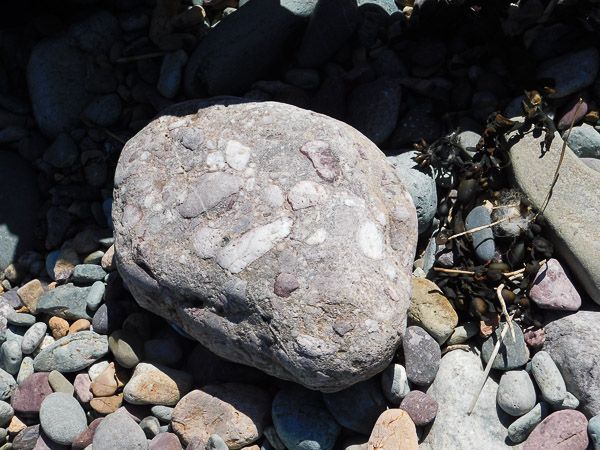 Here are the Pre-Cambrian rhyolitic tuffs from as close as we could get. 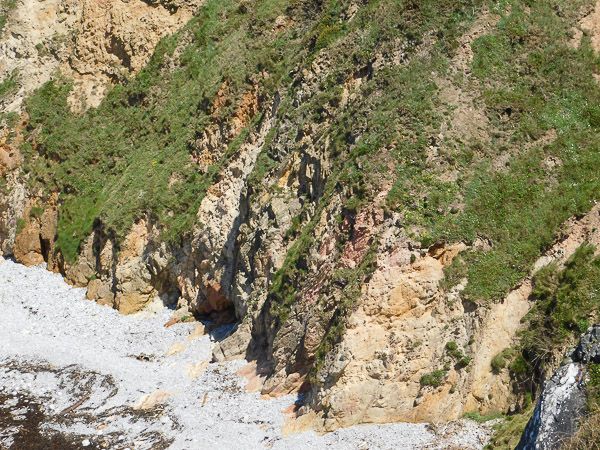 Between Porthlysgi Bay and Porth Clais was an amazing sequence of rocks: Ordovician microdiorite sills intruded into Cambrian sedimentary rocks, before the whole assemblage had been rotated through 90°, so the beds and sills were all vertical. (photos 4&5) 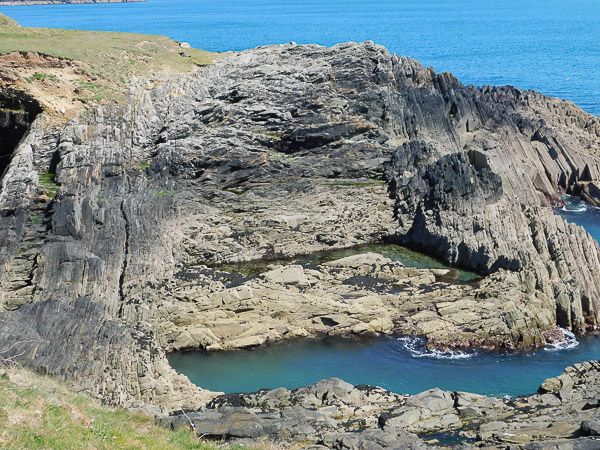 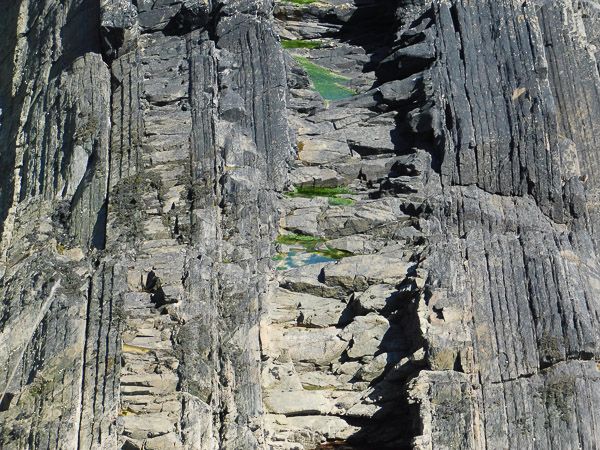 Photo 5: Enlarged photo of above

The two thin sills at the left hand margin of the first picture are shown at higher power in the second picture, with evident columnar jointing caused by rapid cooling of the liquid sill material. (Photo 5)
The wide sill extended beyond the next headland to the West where it was seen as a combined sea stack/arch due to its resistance to erosion by the sea. 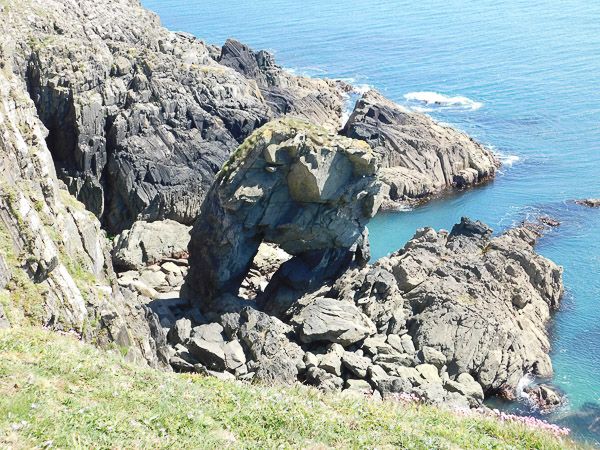 Here is a higher power view of the Cambrian sandstones into which the sills are intruded. 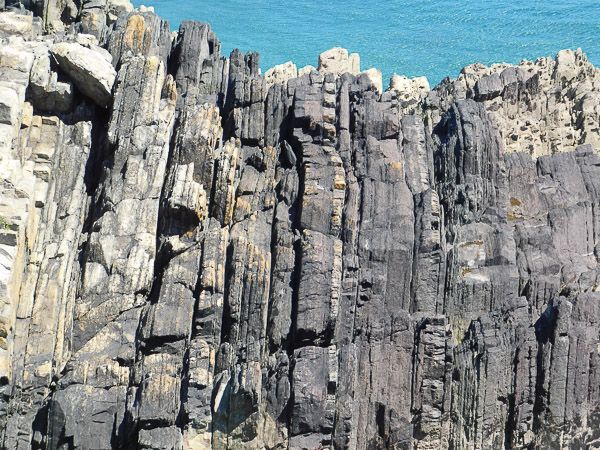 We went to Porthgain (SM 814328) in the morning and Garn Fawr (SM 897388) and the adjacent coast in the afternoon. This part of North Pembrokeshire is characterised by the presence of a large eroded syncline with a gabbro sill in the two arms of the sill, as shown on the geological map.

Porthgain (photo 8) was a thriving quarry and port before the arrival of the railways. Plenty of the industrial history is still visible. It is situated at one end of a glacial melt-water channel which extends to Abereiddi, where we went on Monday. 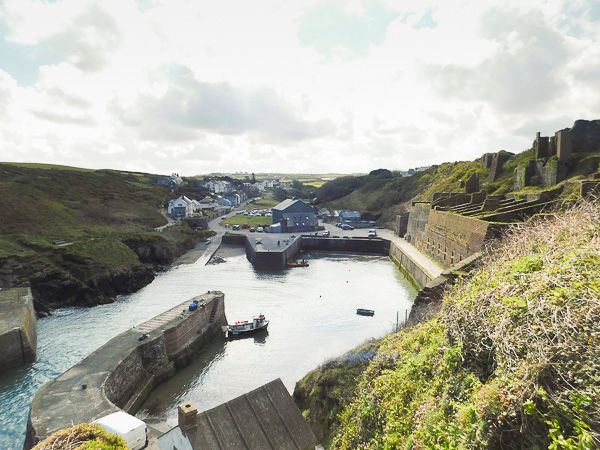 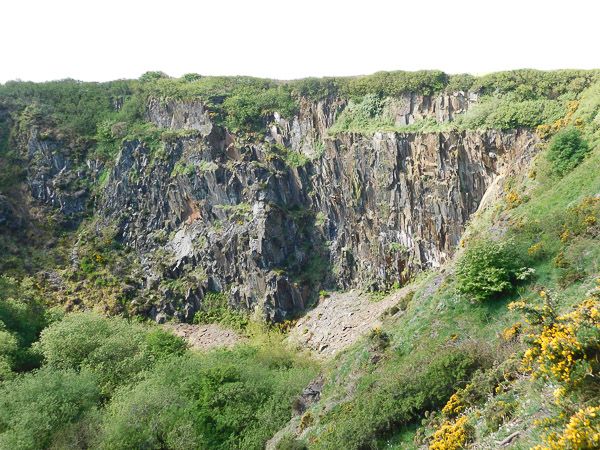 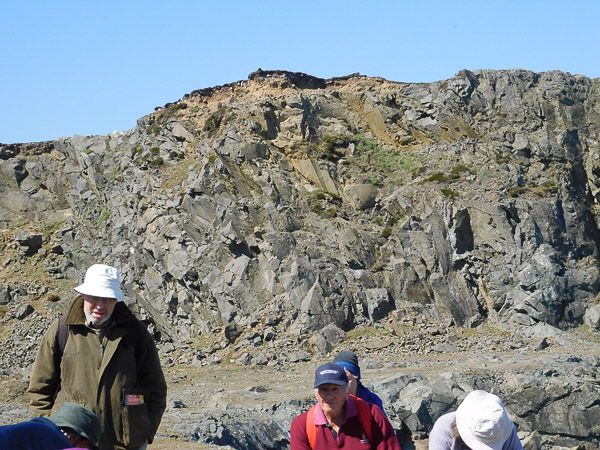 The building stone quarry exploited material from the gabbro sill. The sill extends out to the West as a headland (photo 11), resistant to erosion by the sea. (The photo also shows Strumble Head in the distance beyond the gabbro headland, which was our destination after lunch.) 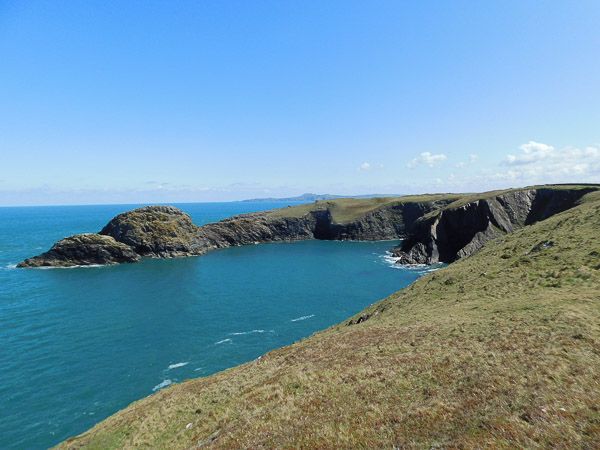 Garn Fawr shows well-formed columnar jointing at the top. The dip of the columns provided a handy resting place for club members after climbing to the summit! (photo 12) 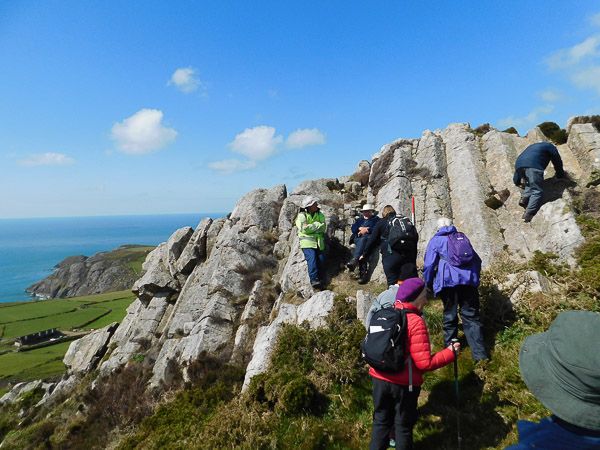 On the left of the photo, in the distance is Pen Brush headland, which was our last stop. This is composed of pillow lavas: a formation >1,000m in thickness. The next photo (photo 13) is taken with a zoom lens from the coast path South of Porth Maenmelyn and shows well-formed pillow lavas at the inaccessible tip of the headland. 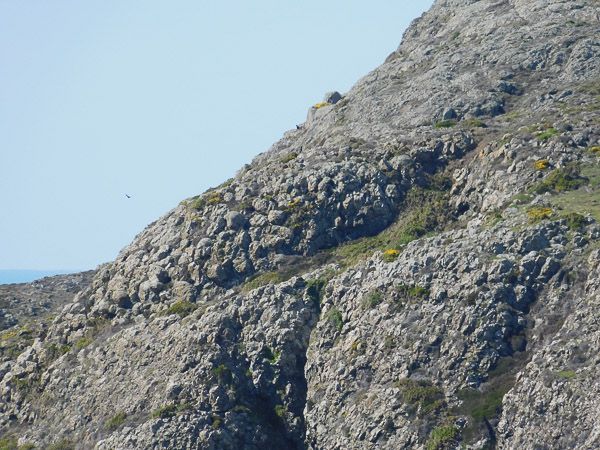 Photo 14 is a close view of three adjacent pillows with a hammer for scale. You can see the dark infill material between the pillows, the chill margin around the outside of a pillow and the pattern of spherical weathering. 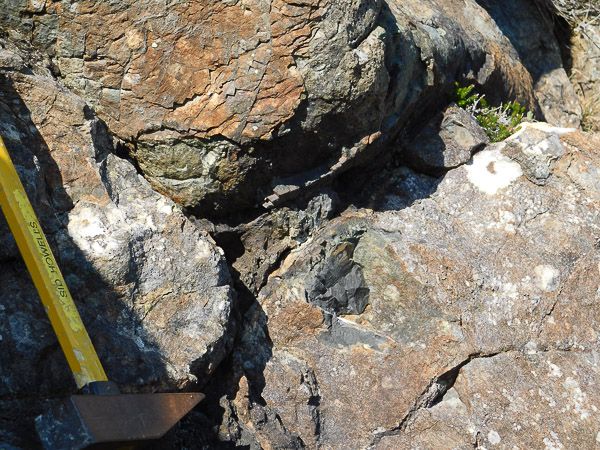 We went to Abereiddi (SM 797312) and then walked North along the coastal path. There is an old, abandoned slate quarry which is now flooded by the sea and mainly used by coasteering enthusiasts the Blue Lagoon. (photo 15) 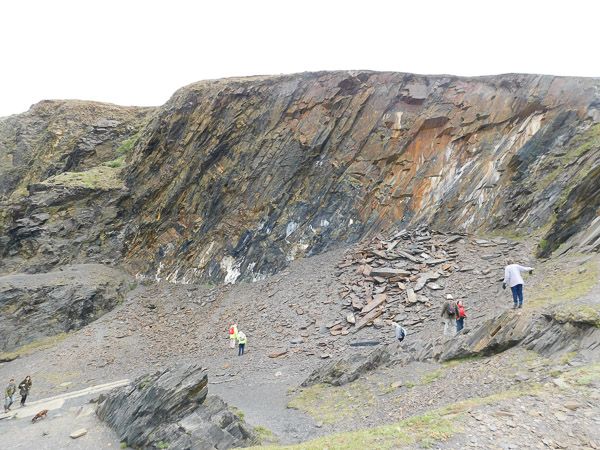 Continuing North along the coast path, we came to Traeth Llyfn (SM 802319 for the steps down). Photo 16 shows the bay with evident East-West trending beds. 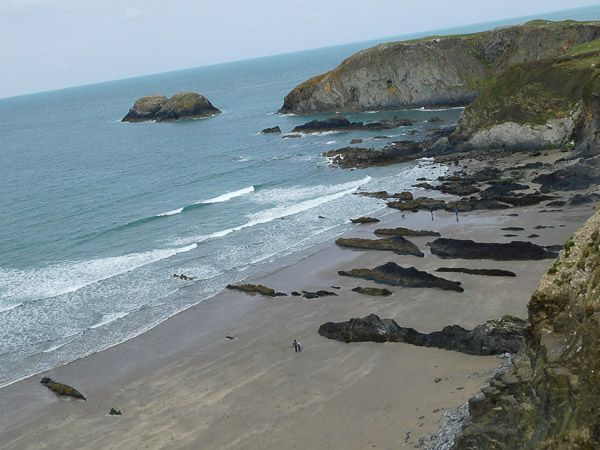 At the Northern end of the bay is a promontory composed of particularly resistant material which continues westward as two small islands. Photo 17 shows a higher power view of the promontory. The rounded top of an intrusion is visible with a radial pattern of cooling joints. 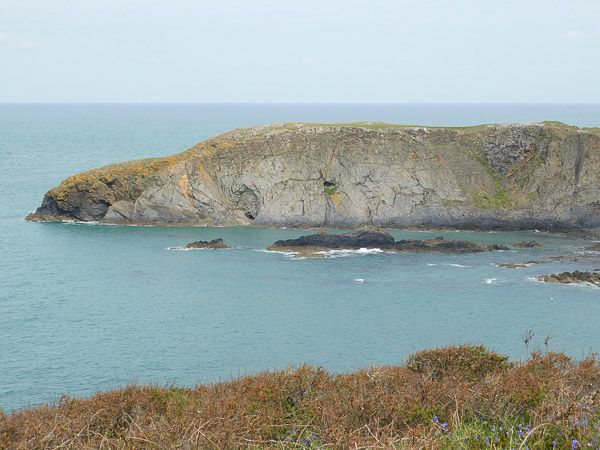 Looking at the Ordnance Survey map and the geological map, it is clear that the coast is made up of multiple bays with intervening headlands. There is a clear East-West trend of the headlands which is mirrored in the geological map. The headlands are all resistant material while the bays are composed of softer, more easily eroded material.

The last photo is the mainly vertical shales of Traeth Llyfn bay on the right with a fault towards the left hand edge trending diagonally downwards. Light brown quaternary infill material is evident above the fault line. (photo 17) 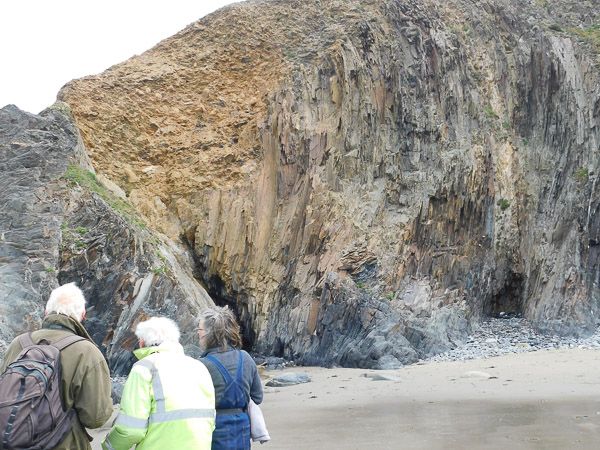 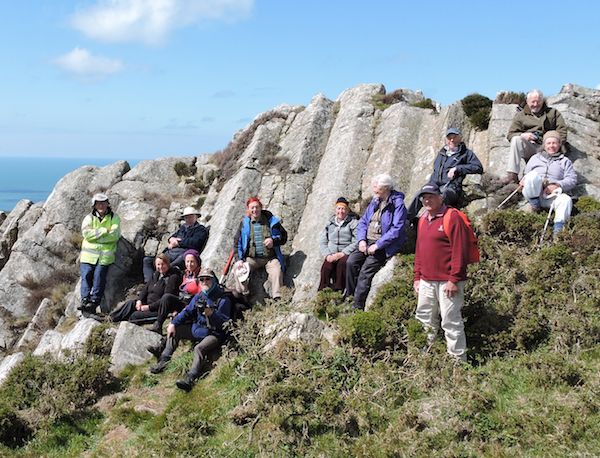