Report on meeting 20th June 2018 Talk on ‘The Geology of Arran’ by Tony Thorp Billed as “not a Geo-tour” the talk comprised tangential digressions from his second visit last year.

Tony had been to the isle of Arran in the Clyde estuary twice. First as a student in 1954 and then last year with Joe Botting’s palaeontological group. He remembered precious little of the first trip, apart from the ferry, which made an impression and, once on the island, sheltering from a blizzard somewhere up Goatfell.

That was before the days of “Ro-Ro”. In ‘54 a more modest ferry went from Fairlie to Brodick and comprised a small steamer which sported a polished brass plate stating that she served as HMS Goatfell during the war, firstly as a minesweeper and then, with guns bolted to the deck, as an ack-ack vessel. It must have been choppy when they crossed as he remembered a pig in a crate on deck had to be retrieved. One could get close and personal to the rather beautiful triple expansion steam engine too. It is a shame that such a vessel met an ignominious end. Sold to Bass-Charrington, she served as a floating pub tied up to the Victoria Embankment until she caught fire in 1980 and was finally scrapped. Her engines were rescued and are at a museum near Liphook, but not on display.

Arran exemplifies Scottish geology in miniature, igneous, metamorphic, sedimentary and both “Highland” and “Midland Valley” types. These were investigated with Joe during a glorious week last year. However, there are many “Geo Tours” of Arran available in the literature and on the web, so Tony expanded on items which made a special impact. 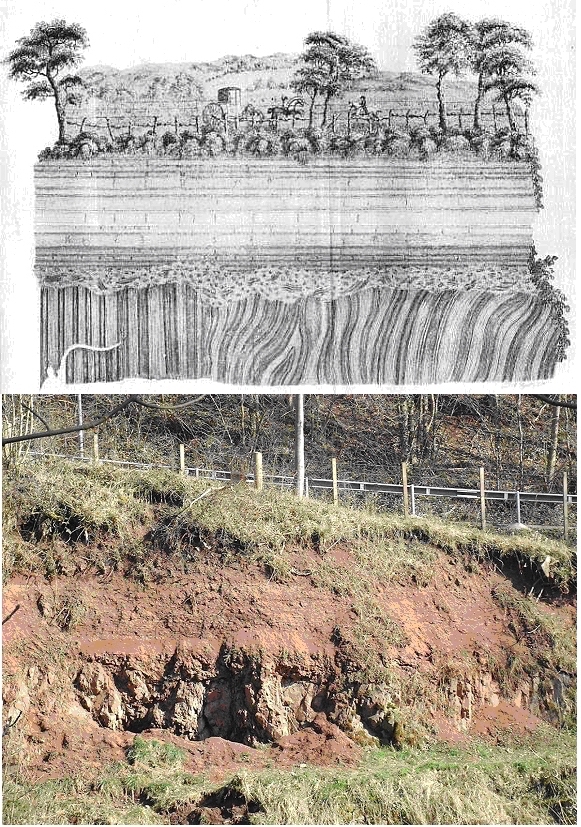 They are mentioned in the first chapter of every geology text book and represent a key moment in our understanding of the world we live in, when the literal biblical model of how our planet got to be how it is was shown to be untenable. Hutton realised that an angular unconformity, where bedded sedimentary rocks, all presumably laid down horizontally, were overlain by beds at a different angle must represent a very long time interval during which normal processes of erosion, deposition and vertical movement occurred. He founded the “uniformitarian” movement.

It is quite astonishing that, at this very significant location, there is nothing to indicate how special it is, no sign, no information board, no monument! Even passing locals were unaware of the location and indeed, it took a while to locate it precisely.

Looking for the unconformity 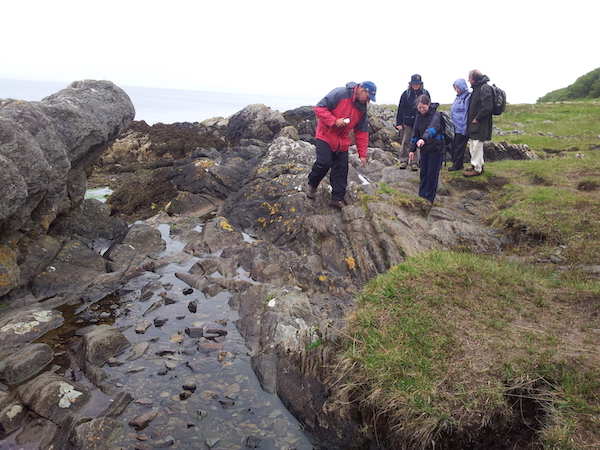 But, what of Hutton himself, and how is it that, outside of a specialised discipline, he is so unrecognised?
He was born in Edinburgh, the son of a merchant who died when he was 3 years old. At High School he excelled at maths and chemistry but on leaving, he was apprenticed to a lawyer. He preferred chemistry and unsurprisingly, was sacked at the age of 18. He then became a physician’s assistant, attended lectures at the University and, further studying, went on to Paris before graduating MD from Leiden.

Returning to Edinburgh in 1750, he teamed up with schoolfriend James Davy to start a successful factory making sal ammoniac from soot.
He took seriously the management of a family farm in Berwickshire, going to Norfolk and Holland to study best methods. He was not averse to getting mud on his boots and could not resist sticking his nose into every ditch and quarry. Presumably this paid off as he was eventually able to afford a manager.

It was the time of The Enlightenment, when Edinburgh was at its zenith and he was rubbing shoulders with John Playfair, the mathematician, Joseph Black, the chemist and Adam Smith, the economist. In 1783 he read a paper to the Royal Society of Edinburgh on his “ Theory of Earth.” in which, contra to biblical teaching, he proposed that:
1 Land was not original, but composed of products of earlier lands. (Like found on the shoreline.)
2 Before the present there had been earlier lands with tides and currents like at present.
3 The sea had been inhabited by animals as at present.
So the land had been produced by processes which operated as at present.
For this to occur, two things were required:

Later he went on a tour with John Clerk to confirm his theory, visiting Glen Tilt, where he noted granite penetrated the “schistus” and cooked the contact showing that it cooled from molten and was not precipitated from water as Werner’s Neptunian/catastrophic theory postulated. Similar effects were noted at “Hutton’s Section” in Edinburgh. That and his various unconformities all confirmed his theories. His “Theory of the Earth, with Proofs and Illustrations” was published in 1795.

This made little impact, possibly because his language was somewhat tedious and convoluted; however his friend, John Playfair later wrote “Illustrations of the Huttonian theory of the Earth” (1802) which proved popular and was taken up by Charles Lyell in his “Principles of Geology”.

Hutton and Darwin
As such, Hutton significantly influenced Darwin and it is worth noting that Darwin took both these books on board Beagle.
Hutton also advocated uniformitarianism for living creatures – evolution, in a sense – and even suggested natural selection as a possible mechanism affecting them. Quoting directly from “Investigation of the Principles of Knowledge, volume 2.”
"...if an organised body is not in the situation and circumstances best adapted to its sustenance and propagation, then, in conceiving an indefinite variety among the individuals of that species, we must be assured, that, on the one hand, those which depart most from the best adapted constitution, will be the most liable to perish, while, on the other hand, those organised bodies, which most approach to the best constitution for the present circumstances, will be best adapted to continue, in preserving themselves and multiplying the individuals of their race."

Hutton gave the example that where dogs survived through "swiftness of foot and quickness of sight... the most defective in respect of those necessary qualities, would be the most subject to perish, and that those who employed them in greatest perfection... would be those who would remain, to preserve themselves, and to continue the race"

Bearing in mind that was published in 1794 and the “Origin of Species” in 1859 how is it that, outside his subject, his unconformities and his ‘section’, Hutton is memorialised by one garden, one Institute (since 2011) and one road (James Hutton Road since 2016); whereas Darwin has innumerable roads, colleges, universities, towns and even a city to his name!
It may be because Hutton was neither an aristocrat nor an academic. We only have one indifferent portrait of him. in which he appears rather po-faced, not the man with mud on his boots with his nose in a ditch! Not being an academic, he was casual about his publications, he actually lost 70 illustrations for his final masterpiece which only turned up in the 1960s 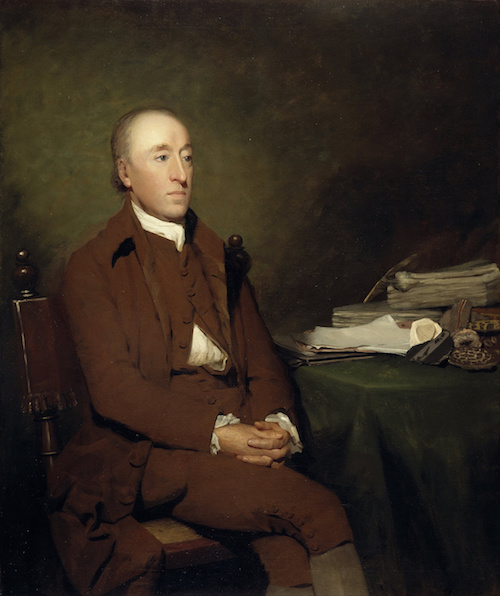 The Corriegills Pitchstone
Tony has been intrigued by pitchstones for some time because they are very rare, but several varieties occur among the dykes and sills in the British Tertiary Volcanic Province. In thin section, they are quite unlike any other rock; so last year he stayed on an extra day to visit the Corriegills location on the coast a few miles south of Brodick.
The exposure did not disappoint, it is in the cliff, above high water mark and lookes like black marble 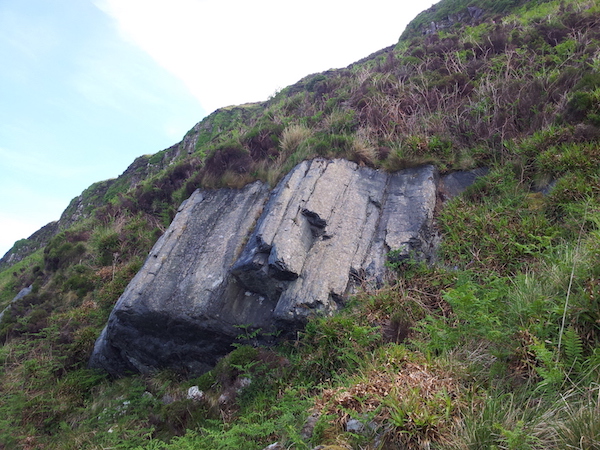 Similar to obsidian, pitchstone is less glassy, has a hackly fracture and contains more water. It has a granitic chemical composition and in thin section is glassy with masses of feathery growths resembling little fir trees of the order 100 micron long. 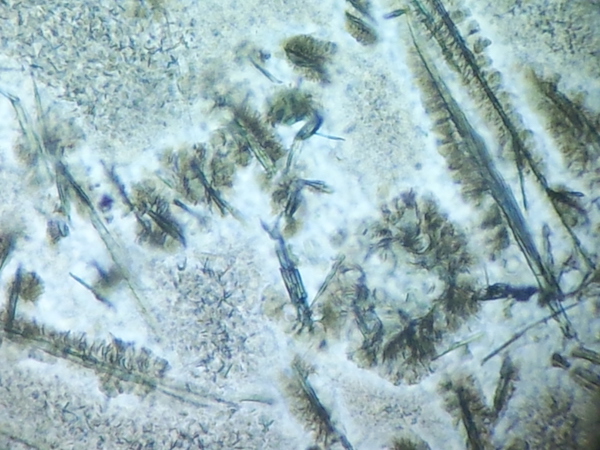 There are also clouds of very small microlites showing some flow structure which are depleted near the growths. The suggestion is that the larger growths are hornblende but the microlites are indeterminate. Pitchstones contain 5 to 10% water, far more than obsidian and this has profound effects. Water has the ability to break the polymer chain in silicates and reduce viscosity. It is thought pitchstones could originate by contamination of basaltic magmas with hydrous crustal material thus producing a low viscosity high silica melt which solidifies to a glass if cooled quickly as a dyke or sill.
Pitchstone is a rock the structure and derivation of which are still in debate.