Last month's zoom meeting ( October) John Mason had to cancel his talk on "Coed y Brenin" and we fell back on a more participative format for our meeting, which was quite refreshing and more in the spirit of the club.

We had lots to talk about, in particular, our September trip ( following Corvid guide to six participants) to Tonfanau. Both Bill Bagley and Chris Simpson had taken lots of photographs and Chris had prepared and gave a presentation, with comments and contributions from the other members. For our members who live inland on top of a post glacial landscape, where sections quickly become vegetated, Tonfanau offered a rare chance to see features in an extensive clean vertical section.

The section is accessed through a gate at the southern end of the section, near the site of a borehole which showed some 36m of Quaternary till and gravel, on Tertiary deposits, with Cambro-Ordovician sands and siltstones at 71m. So we were seeing a thin section above a thick pile of glacial deposits. 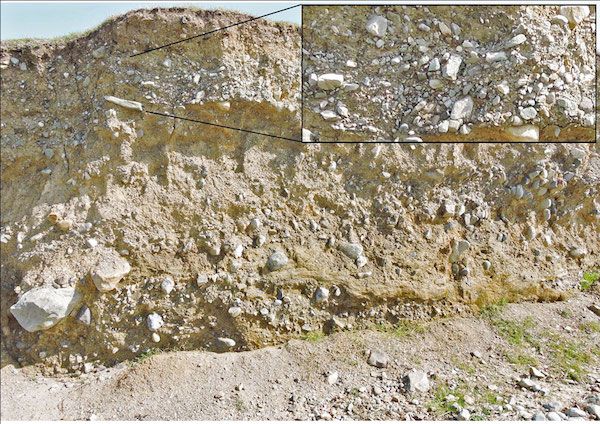 The cliffs here comprise 2-3m of a massive beige-brown till containing clasts from pebble to boulder size, ranging from angular to rounded, with some being facetted. The spit test shows it to be quite sandy. Provenance of the clasts has shown them to have come from the north, so this is a lodgement till from the Irish Sea Ice stream. (That is debris carried along at the base of the glacier and deposited without being washed out and sorted with the meltwater.) As some of the clasts are well rounded, there must have been water involved in their history at some time, but they have come a long way and could have a complex past. 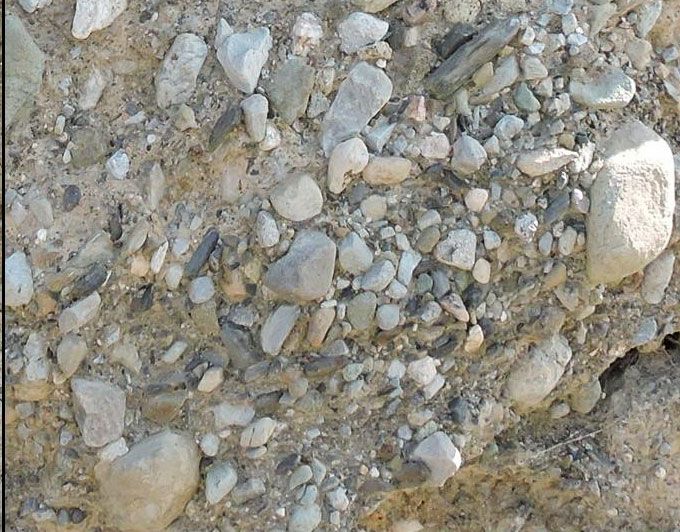 Walking further north, we found Welsh ice protruding at the foot of the cliffs, below the Irish. It was a darker green-grey and was (spit) more clayey. It is interesting that, although clay particles stay suspended longer than sand, once deposited and indurated, they are more resistant to wave erosion and therefore project further onto the beach. On this coastline, at different times, either the Irish or the Welsh Ice, from the hills to the east, must have become dominant. 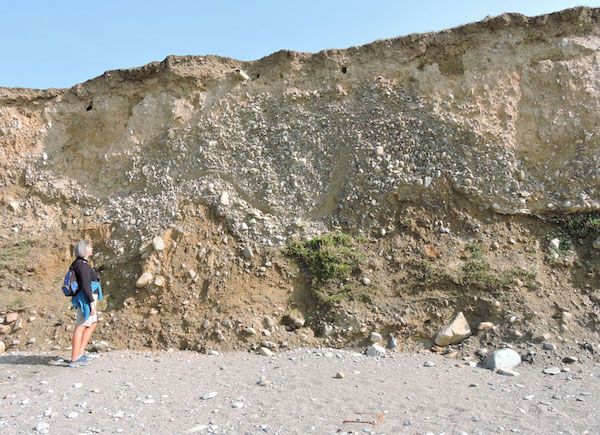 As we went further on, the cliffs got higher, up to 4 metres, and more interesting. We were getting gravel beds of pebble to cobble-sized clasts with little matrix. These must have been transported by very fast flowing water as outwash or esker discharges from the melting glacier. Many of these were broken up as the section cut meandering or braiding outwash channels which were also broken up by ice movement. Thinly laminated silts and sands were also appearing with the occasional lone stone which appeared to be a "dropstone" i.e. one released from the bottom of floating ice or an iceberg. 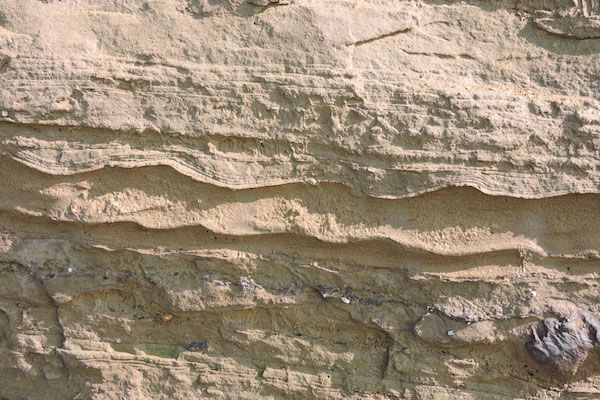 We were left with a vivid dynamic image of the melting snout of a glacier, with braiding outwash channels and proglacial lakes with icebergs.