At the last meeting (20th April 2022) Prof. Peter Kokelaar gave a very interesting and informative talk on how the landscape of south-west Wales changed and evolved over time from the Carboniferous to the present day.
Although based on his work on the Gower peninsula the area covered by the talk comprised a larger area covering the south Wales coalfield, the Brecon Beacons and over to Carmarthenshire across the Southern Caledonian fold belt.

The stratigraphy of the area is dominated by Carboniferous rocks ranging from Carboniferous limestones through the Coal Measures to Pennant sandstones at the top of the sequence. It is underlain by Devonian quartz pebble conglomerates. These rocks were folded in early Permian with deformation coming from compression arising from the south. (Variscan orogeny.) Therefore the area was folded and uplifted from a southerly direction producing folding that propagated to the north. The uplifted material eventually being eroded. 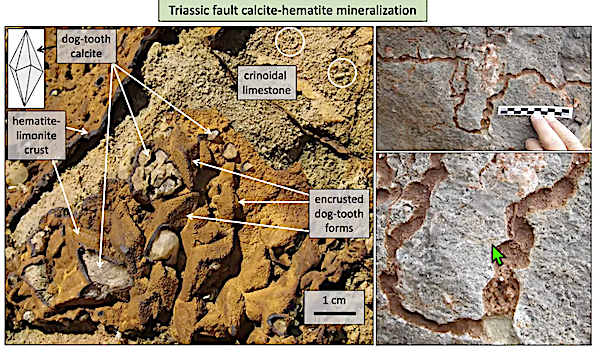 There are two sets of faults in the area, one associated with the folding, and the other occurring later during the Triassic period. The latter are N-S faults related to E-W crustal extension. Hydrothermal fluids flowed through these extending faults leading to mineralisation. With good examples of calcite-haematite mineralisation to be found. At Port- Eynon there is a vestige of Triassic outcrop left. Often fault fissures contain Triassic infill and the lack of development of a karstic landscape suggests that there was no dissolution of the limestone suggesting the landscape must have been arid.The one exception being at Worm’s Head where there is a pothole with infill, suggesting it must have formed below the water table which in turn suggests the onset of Jurassic sea-level rise. Although there is are no Jurassic rocks preserved on Gower there are Jurassic sediments found in other locations eg. in the Vale of Glamorgan. Cretaceous sediments are also absent. 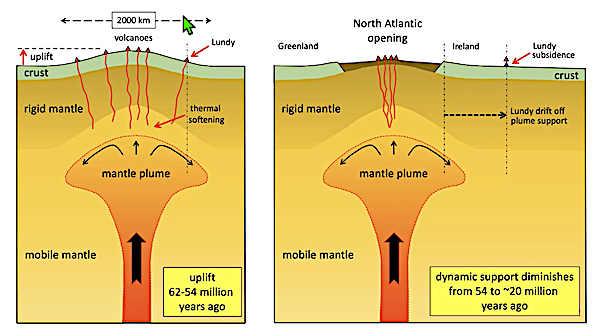 During Paleogene and Neogene (66Ma - 2.58Ma) times the area underwent cooling from a tropical climate to a temperate one. Global sea-level was falling and sub-arial weathering was occurring. At about 62Ma a mantle plume occurred under western Britain and Greenland causing uplift. But this uplift occurred in pulses. Therefore uplift and sedimentation associated with it must have also have occurred in pulses. It follows therefore that the peneplanation in steps that is seen in the landscape is reflecting the pulsed uplift from the plume. Observing various peneplains eg. Cefn Rhondda above Treorchy (420m OD) and Mynydd Epynt (420m OD) it becomes obvious that large volumes of rock must have been eroded over time. Similarly looking across what was the Caledonian Mountain belt it is obvious that huge areas have been eroded. 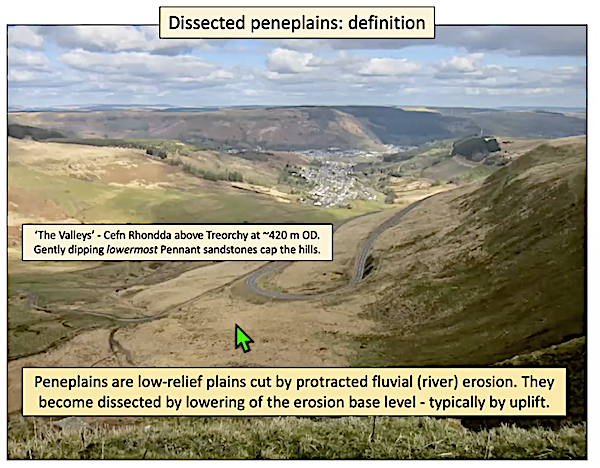 The uplift partly accounts for the tilt of Britain as the dynamic support was uneven being greatest in the west and lowest in the east. Further, at 54Ma the Atlantic opened which caused Britain to move away from the uplift of the plume due to sea floor spreading. Thus dynamic support diminished from 54-20 Ma. Proof of the loss of about 1km of rocks can be found when one observes Lundy Island ( Lundy volcano) as here the granite ( dated 60-57Ma) is now exposed.

During the Pliocene (5.33-2.58Ma) the crust is cooling and becoming denser, land subsidence was greater than sea level fall so that a marine transgression occurs. As such the transgression led to the development of marine platforms formed by marine planation. During this time those areas not under water formed small islands with the areas in between undergoing planation. The planation is caused both by mechanical abrasion and chemical dissolution of the limestone. 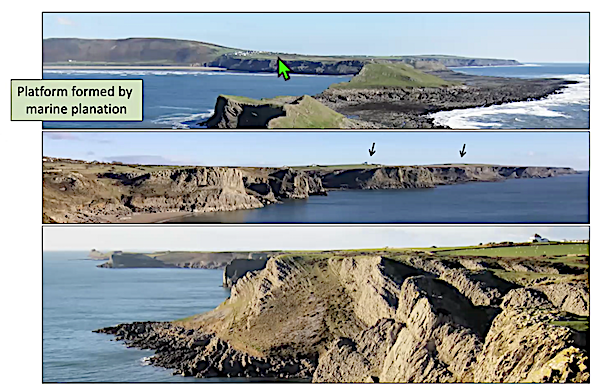 During the Pleistocene ( 2.58-0Ma) the opposite is true in that sea level fall is greater than land subsidence which led to marine regression. This was related to glaciations which were interspersed with interglacial periods in which sea level would rise thus giving rise to cliff formation.

Using erratics Prof, Kokelaar also mapped the extent of the last glaciation on Gower (23,000 years ago) which was the Last Glacial Maximum when global sea level was 120m lower than it is today. Looking at “Arthurs Stone” which is on the limit of the Ilston lobe, the area has a high number of erratics which is due to the ice being forced to this level due to topographic barriers. Therefore the landscape has been moulded by the ice which has also left a mantling of till. Also during this time even if the ice was not present the temperature would be low causing freeze thaw action on the rocks producing screes which flanked cliffs and buried caves. 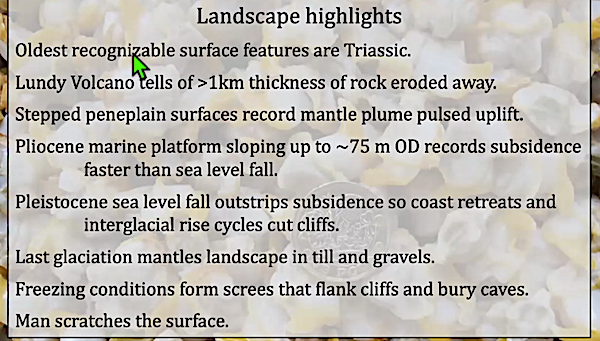 If you are interested in learning more and in much greater detail then I encourage you to Buy Prof. Kokelaar book “All Our Own Water: Landscape Evolution, Caves and Hdrogeology of Gower”. ISBN 978-1-3999-0335-6