Introduction to the Geology of El Hierro

At the meeting on 19th May Dr.Chris Simpson gave an illustated talk entitled: "Introduction to the geology of El Hierro." The talk was based on a guided trip round El Hierro organised by Chris Darmon at (http://www.geosupplies.co.uk) in 2019. El Hierro is the most Westerly of the Canary Islands, and one of the smallest. Its neighbour, Tenerife, is a well-known tourist destination with an international airport and a population around 900,000. El Hierro, by contrast, has only a small local airport and a population around 10,000. It is well off the tourist trail; and is generally only visited by people interested in the geology, the wildlife or for walking the footpaths.

Below is a simplified geology map of El Hierro 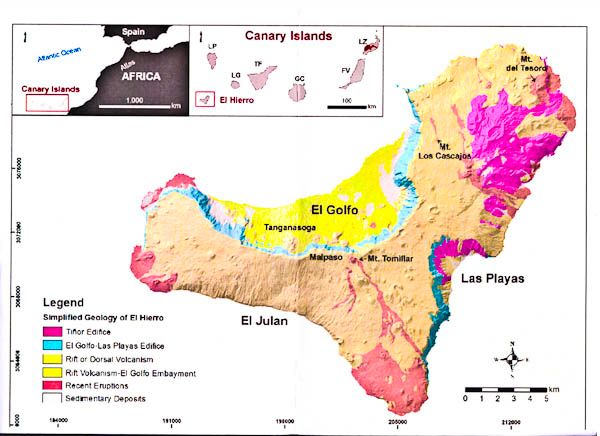 The two inset pictures give the location of the island. The main picture shows the tricorn shape of the island, which is typical of many volcanic islands because after the eruptions which lead to the formation of these islands, there are commonly episodes of flank collapse when large amounts of poorly consolidated rock fall away into the sea. El Golfo was the largest flank collapse when 120 cubic km of rock fell into the sea and produced a huge tsunami.
On the map, the darker red areas are the older volcanics (mainly on the NE corner) and the paler reds are the recent eruptions, mainly at the southern tip and the far west of the island.
The talk went through the variety of geological features which are well demonstrated in El Hierro and make it a worthwhile destination for any geologist: cinder cones, lava flows, ash deposits, dykes and the three impressive flank collapse vistas. The following selection of photographs gives a summary of what makes El Hierro special.

Mostly horizontal lava flows with some later flows at around 45° at the top right. Between some of the horizontal flows are reddish laterites – palaeosols 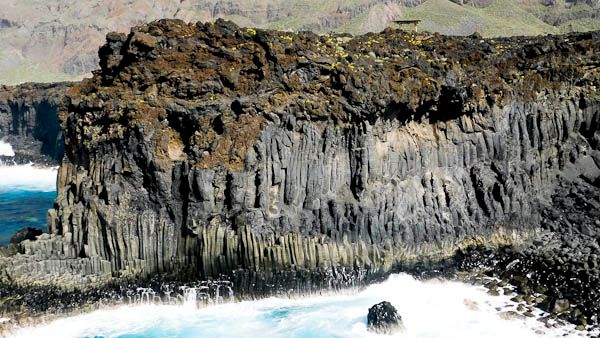 Successive lava flows with well-formed columnar jointing reminiscent of the Giant’s Causeway in Northern Ireland underneath. Along the top is a later flow of rubbly ‘A‘ā lava. 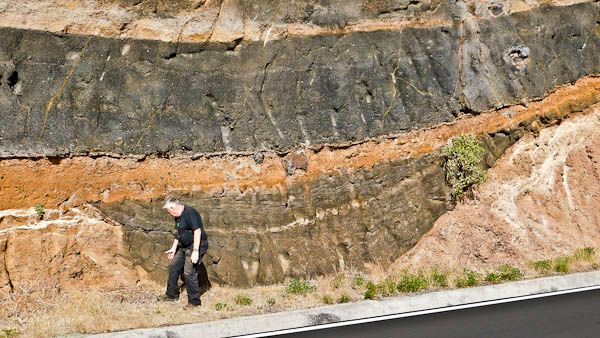 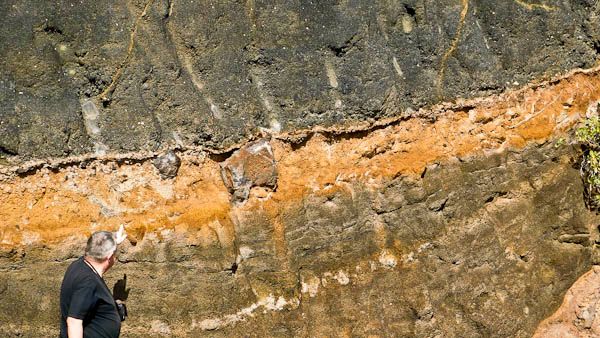 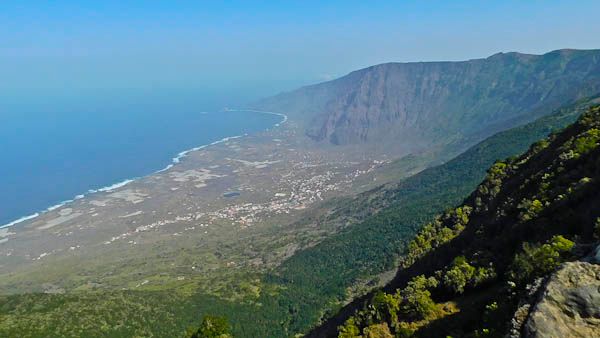 A view from the western flank of the El Golfo embayment – site of a huge flank collapse a few hundred thousand years ago. Numerous vertical dykes are seen in the near-vertical eastern wall. The flat land left after the collapse is now the main settlement on the island and the largest area for agriculture. 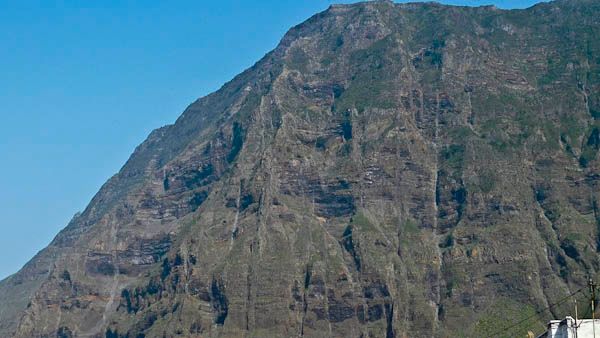 A higher-power view of the eastern flank. There are at least 12 vertical dykes visible in this small area, although they can be quite hard to discern at this magnification. The dykes cut across successive lava flows, so came after them. The existence of large numbers of dykes is one reason why flank collapse is so common on volcanic islands.