At our indoor meeting on Wed 20th February, Bob Loveridge, Research Fellow in the School of Earth and Environmental Sciences at the University of Portsmouth, gave a talk on 'Flying reptiles at Buckingham Palace', including how a team of researchers did their giant pterosaur spectacular for The Royal Society's 350th Anniversary and how they took pterosaurs to meet the Queen at Buckingham Palace.

Pterosaurs were flying reptiles, best imagined as "flying crocodiles". Finds in the early 19th century were generally described as avian, including "bird bones" described by Gideon Mantell and finds by Dean William Buckland of the first UK specimen. In 1828 Mary Anning uncovered a complete specimen, albeit as a jumble of bones. It was Cuvier who first reconstructed the skeleton and recognised them as flying reptiles. 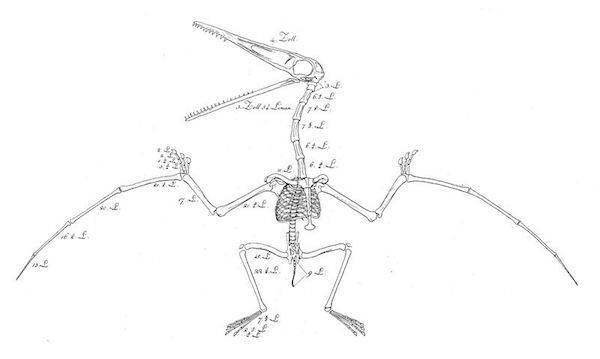 They were famously popularised by Conan Doyle when he published "The Lost World" in 1912 and have remained popular ever since.

Pterosaurs evolved in the Triassic and developed into many forms from the size of small birds to the giants with enormous wings and long necks and heads in the Cretaceous. They sported bizarre head crests the purpose of which is obscure. They could have been for maintaining heat balance or for sexual display. (It is established that they had sexual dimorphism.)

The largest, Quetzalcoatlus, was some 40ft long, with a three metre neck and head, the largest ever flying animal, comparable to a Spitfire! It probably fed on small fish and there is some controversy over how they flew, but it does look as though they were capable of powered flight.
The skeletal structure was somewhat bat-like, with the skinny wings supported by an extended fourth finger. Unlike birds, on landing, they took up a quadruped position.

One recently discovered, now in the Kimmeridge Museum, is named Cuspicephalus scarfi after Gerald Scarfe due to its resemblance to Scarfe's iconic charicature of Margaret Thatcher!

As part of the celebration of the 350th anniversary of the founding of the Royal Society, the team from the University of Portsmouth built a flight of life sized flying pterosaurs which 'flew' (suspended on wires) above the Southbank Centre in London.
In addition to celebrating the founding of the oldest scientific society, it was an opportunity to learn more about how these animals flew and walked. The models were built on a lightweight frame with assistance from Griffon Hoverwork and were fabricated from foam with a hairy textile covering. The eyes comprised finials from B & Q, suitably painted.
To demonstrate the size of these animals, with help, Bob unfurled a scale drawing of one wing which went two thirds the length of the auditorium. (The whole animal would not have fitted in the room.)

The models were also exhibited at Buckingham Palace as part of the Queen's 80th birthday celebrations when they were enjoyed by her, other members of the Royal Family and by many schoolchildren invited for the occasion.

Bob was thanked for showing us models, books, drawings and fossils and giving a memorable talk with a difference.

The next meeting will be on Wednesday 20th March when Professor Michael Roenbaum wiii give a talk entitled: "The Elan Valley Aqueduct and the Birth of Engineering Geology."