Sunday, 22nd of September, we took part in one of the best field
trips of the season. We had a bit of drizzle at one location, but otherwise the weather was ideal for walking, cloudy with occasional sunshine.

The Woolhope Dome is a classic Silurian location, being where one of
the earliest geological field trips took place and after which the
Woolhope Naturalists Field Club (est 1851) was named.
It is roughly elliptical and about six miles long, exposing rugged
Silurian rocks surrounded by the lower relief of the “Old Red
Sandstone”.

During Wenlock and Ludlow times alternating beds of limestone and
shale were laid down and were subsequently folded into a dome-like
anticline. Erosion acted unevenly, leaving the harder limestones as
high escarpments, rather like ramparts, separated by roughly circular
valleys corresponding to the shales. The older rocks are exposed in
the centre, with younger strata surrounding them

The meeting point was the large car park at Founhope Recreation
Ground, where initially Geoff explained we would see a classic eroded
anticline similar to e.g. the Zagros Mountains in the Middle East, but
on our doorstep and covered in vegetation. In some ways it is similar
to the Hafren Forest area where Ordovician rocks form an inlier within
the Silurian.

The geology is contemporaneous with the Silurian nearer home where it
is more basinal. The Dome comprises a “shelf” facies and Geoff had
scaled equivalent sections to compare shelf with basin, the total
thickness of the shelf deposits being about one third of that of the
basinal ones. This reflects the much greater subsidence in the basin,
occasioned by movement on the NE to SW Caledonian fault system along
the shelf edge.

For convenience, we left one car and took the other to our start point
on the geologically lowest stratum at the highest point in the centre
of the dome in Haugh Woods.

The trip was carried out as a short, but stiff, three mile walk back
to the village, going up the sequence. (We made one concession to
convenience, by calling by car at what should have been the last
location. This was in the Pridoli Downton Castle Formation, comprising
reddish thin bedded sands and silts, somewhat reminiscent of the same
formation in Downton Gorge. Had it been present, the bone bed would
have been somewhere in the scree at the bottom.) 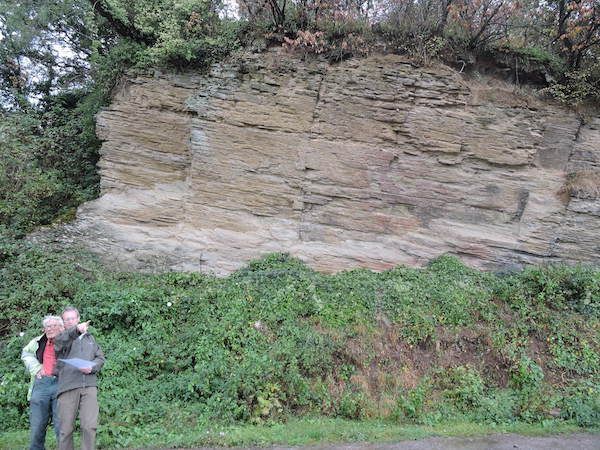 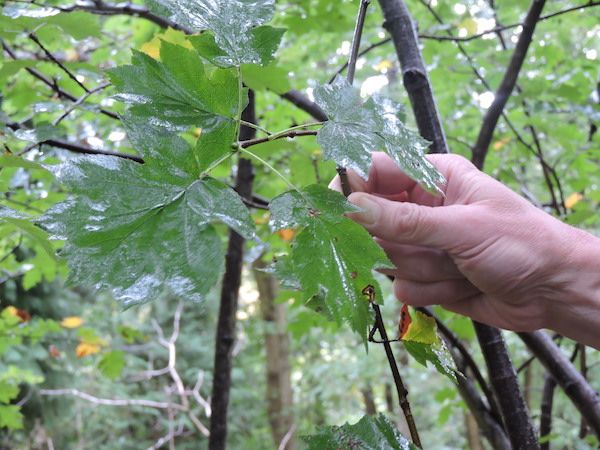 In Haugh Wood, after a diversion to look at rare specimens of the Wild
Service Tree (which is a Sorbus, like the rowan and whitebeam, whose
berries were used to “bitter” beer before hops were used and whose
leaves showed an interesting evolutionary stage within Sorbuses
between the simple palmate of the whitebeam and the ash-like ones of
the rowan.) we made a passing acquaintance with the Haugh Wood
Formation in the forest path. This was a greeny-grey poorly
fossiliferous thin bedded limestone which lay just below the Woolhope
Limestone. This we soon found well exposed both in a track and in a
nicely cleaned up quarry which is an SSSI, so no hammers.
where we had lunch. The bentonites are at the bottom of the exposure shown. 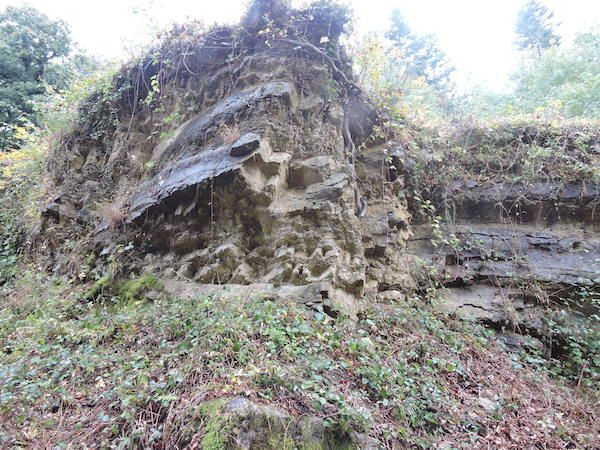 We did find three bentonite beds exposed in medium bedded limestones
with some more massive limestone beds. There were plentiful crinoid
ossicles, some bryozoans and some rhynchonellid brachiopods. Picking
suitable rocky seats, we enjoyed our sandwich lunch in the sunshine
before walking down the wooded dip slope into the surrounding valley,
where the more easily eroded Wenlock Shales were exposed in a stream
bed. 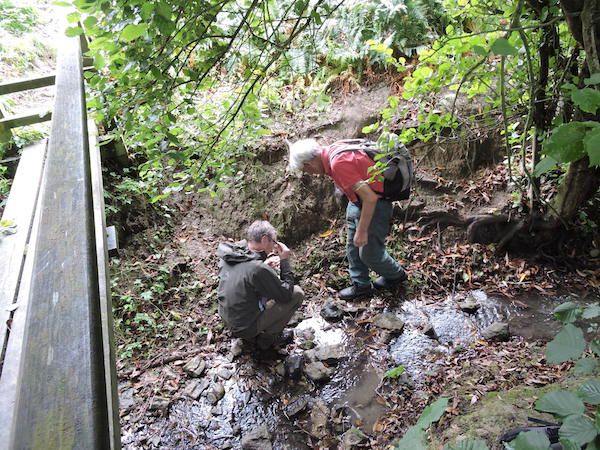 Crossing two level grassy fields, we ascended the wooded scarp
slope of Wenlock Limestone. This was exposed in some small disused
quarries, stuffed with fossils. After fossiling, once again, we walked
down the dip onto the Lower Ludlow Shale where the shale comprised
level pasture before climbing up the wooded scarp of Aymestry
Limestone. At the top, we could examine the rock where it was not too
well exposed alongside the track, before walking down the dip slope
and back into the village of Founhope. There we come off the dome onto
the level ORS Raglan Mudstone as we returned to our start point.

For a short walk, we had seen an extraordinary geological section
through an eroded anticline which is a location of both geological and
historical significance. 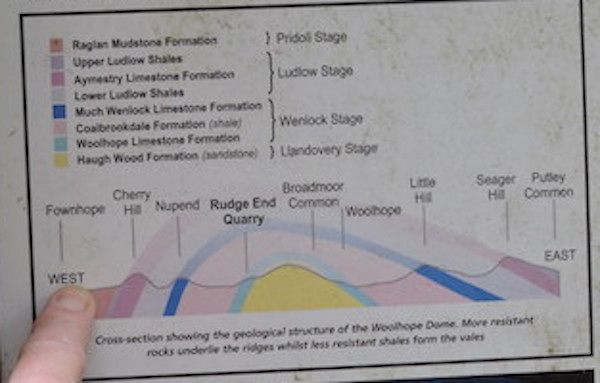 Section through Woolhope Dome from information board

I have previously visited the dome in the distant past, with other
societies, but only as a multiple location car tour. I realise now
that was the wrong way to approach it, giving a poor representation of
its structure. It was far more instructive to take it, as now, as a
short, but sometimes steep, walk. Very rewarding, as the walk up the
scarp can be tough, but one can relax on the gentler descent down the
dip!