Members enjoyed a trip round the Pontneddfechan area led by Dr Gareth George. Gareth also led a field trip on the Mumbles Coast for the Severnside group of the OUGS on the Saturday, so all our members attending went to both meetings, and we were joined by some Severnside members for our Sunday field trip. The weather was rainy in the morning, but it brightened up later on.

The limestone quarry has thick basal beds which represent the top of the Oxwich Head limestone with thinner overlying beds which are the bottom of the Oystermouth series. 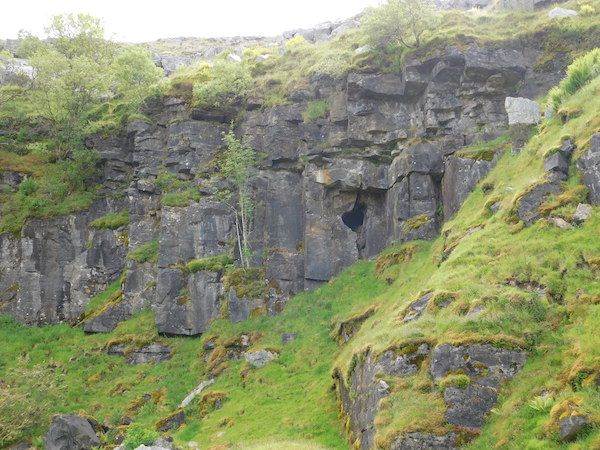 Limestone quarry with the Oxwich/Oystermouth junction

In some areas there is a paleosol between the Oxwich & Oystermouth; but it was inaccessible in this particular quarry.

Left on the quarry floor were some blocks with a good demonstration of hummocks and swales: a particular sedimentary feature which usually indicates formation during stormy weather. 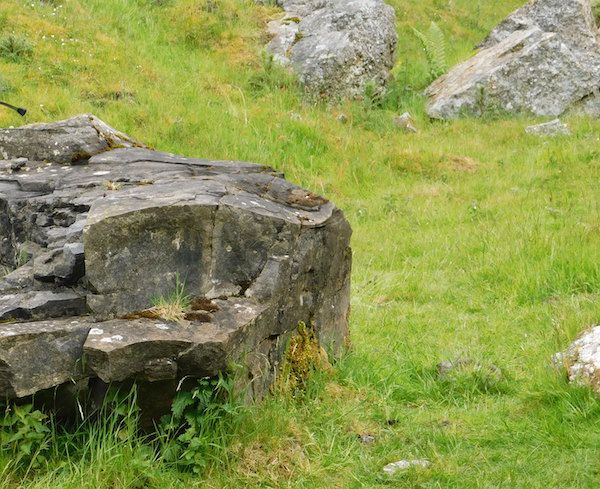 The curved upper surface of the block is the hummock 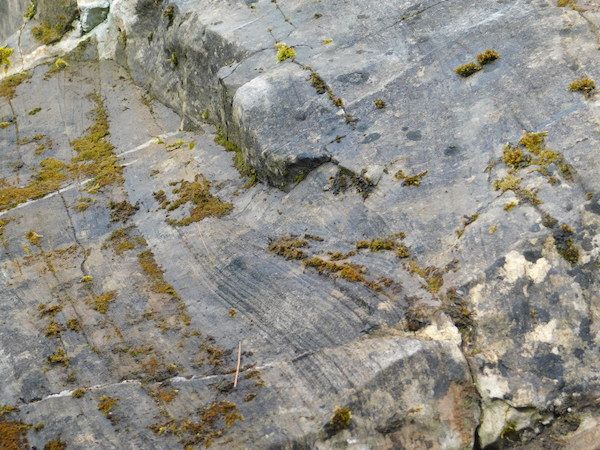 hummocky pattern of the laminae on the side of the block

We then went to a quarry in the Twrch sandstone where there is an excellent example of an old channel formation: a localised lens-shaped sandstone structure within regular beds. 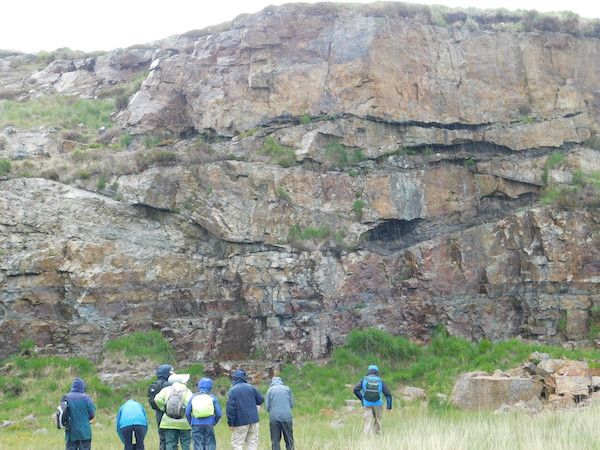 We then went to the River Tawe at Ynyswen where the river forms a deeply incised meander with multiple sandstone beds exposed in the vertical valley side. Within this exposure is a distinctive bed called the Twelve-foot sandstone. The river is actually running over the top of the Twrch sandstone which we had previously seen in the quarry at Penwyllt. 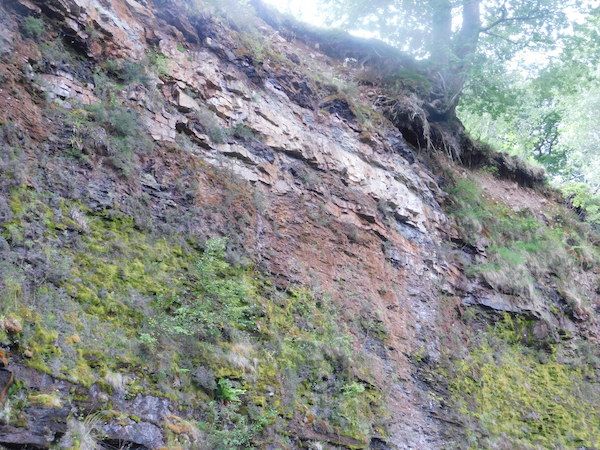 the twelve-foot sandstone high in the vertical valley side 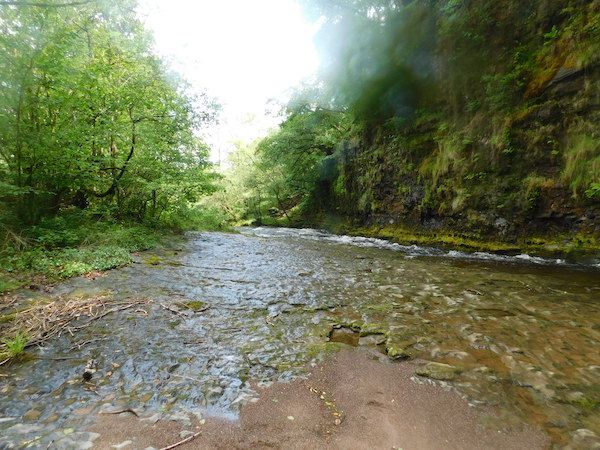 the top surface of the Twrch sandstone forming the river bed

The next stop was Henrhyd Falls – the highest waterfall in South Wales, with a drop >90ft. The water falls over a resistant sandstone layer known as Farewell Rock. The name came from the 19th century coal miners who recognised that if they dug down to this particular rock layer, they could say farewell to any chance of finding coal beneath it! 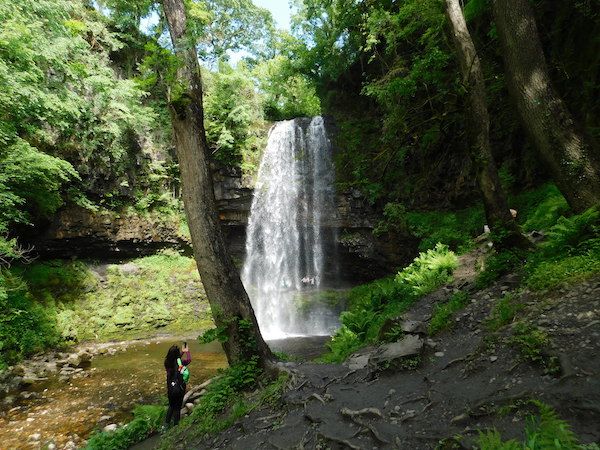 Henrhyd Falls, where brave souls can walk behind the falls!

The final stop was at Craig y Dinas. From there, it was a short walk along the Sychryd valley to see Bwa Maen – a spectacular folded block of limestone within a fault zone. Bwa Maen is “bow of rock” in English. The South Wales coalfield has several extensive fault systems. The old miners did not know about faults; they just knew that there were lines where you could not follow the coal seams any more, and they called these “disturbances”. The Vale of Neath Disturbance is one such major fault system, with the main splay of the fault (the Dinas Fault) going along the Sychryd Valley. 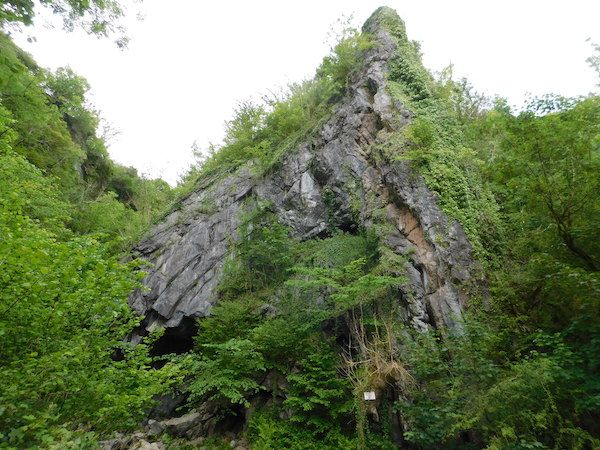 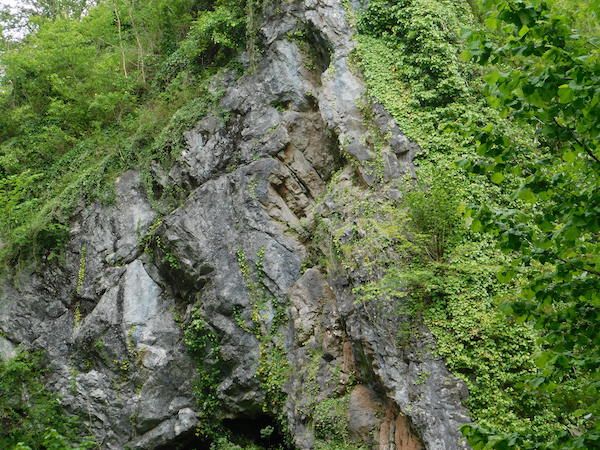 the apex of the fold