The area around Coed-y-Brenin is geologically complex. The rocks are sedimentary, Middle to Upper Cambrian in age, are intruded by intermediate to basic igneous rocks of late Cambrian to Lower Ordovician and are uncomformably overlain by the Lower Ordovician Rhobell Volcanics.

The area, once grazed lands, was planted with dense conifer forests from 1920 onwards causing rock exposures to become hidden.This makes geological mapping difficult although cuttings alongside forestry roads do allow for some work to be undertaken. Since the mid-1990’s John has worked in the area undertaking mapping and geochemical analysis. Along with Natural Resources Wales he set up the “Volcano Trail” in early 2000’s. In recent years, John has been doing further detailed mapping of the area, both by himself and in conjunction with students working on collaborative projects. 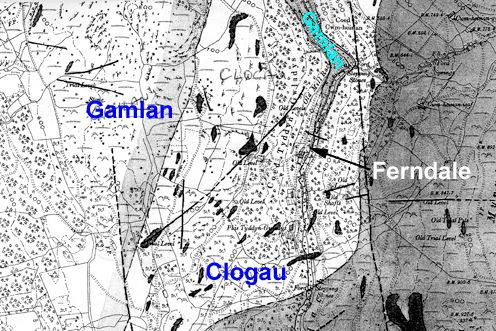 Part of a map dated 1907, by A. R. Andrew, annotated by John Mason. This map was prepared some decades prior to the purchase of the land by the government and its extensive afforestation. Of the extant maps, it is the closest to what is present on the ground, although he did not differentiate between intrusive rock-types. He likely had the best mapping-conditions of anyone who has examined this ground, since much of it was hilly pasture at the time. 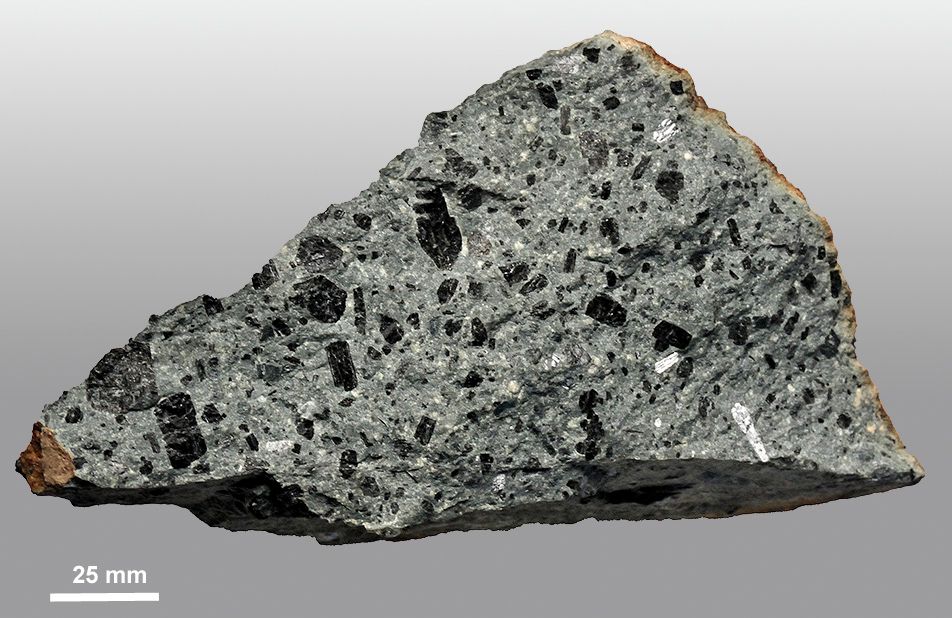 The Northern Porphyry, which occurs as a cluster of angular boulders in excavations in glacial drift in the north of the area examined. Very similar to the Magnificent Uralite Porphyry, but perhaps with even more spectacular hornblende phenocrysts, the parent body remains unlocated, in an area with very poor exposure and dense conifers. Yet the angularity suggests the source is not far away.

Using superb photos of samples/ thin sections of the intrusive rocks John took us through the various Rhobell-related intrusive igneous rocks of the area which describes a classic sequence found in fractionating magma chambers of island arcs. Rocks becoming increasingly siliceous over time. This is nicely shown in the discrimination plot below. One outlier to this sequence was the sample CTG 32 and is probably related to the Aran Volcanic Group with an ocean floor basalt geochemical signature. 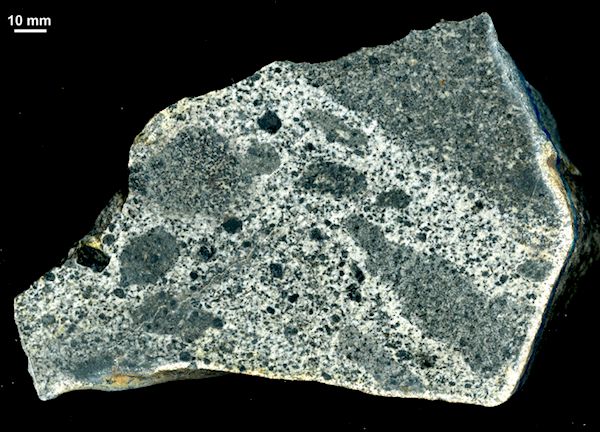 cut and polished section from Daren Wyddan, showing angular cognate blocks of hornblende-gabbro in a matrix of leucocratic microdiorite. Daren Wyddan is a large composite intrusion. The gabbro was intruded by the microdiorite; the latter contains a remarkable inclusion-population including cognate cumulate blocks consisting largely of hornblende and reaching several centimetres in size - in this specimen they are the smaller jet-black areas. These are the first such blocks to be described from intrusives here.

Many of the igneous intrusions have undergone intense hydrothermal alteration often having a grey-green colour and are known locally as “Greenstones”, but there are also unaltered rocks present. Using samples form both rock types it is possible to look at what happens geochemically to a rock when it becomes altered.
John went on to show us the results of various geochemical analyses on some of the intrusive rocks, both altered and unaltered. On one least altered rock sample the plot had a trend which would be expected in a fractionation sequence but it’s altered form showed no such trend. 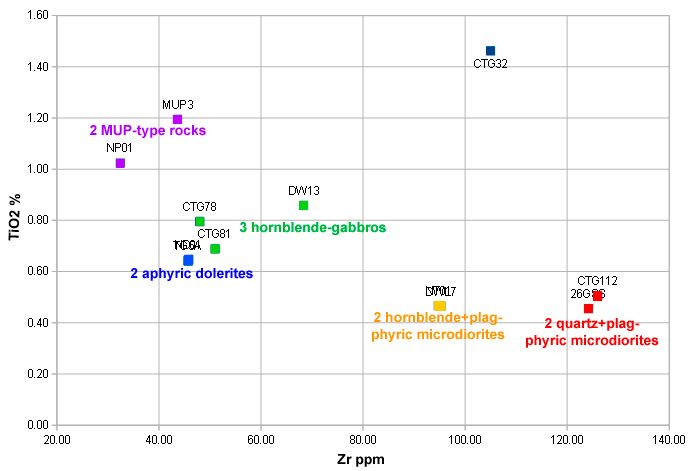 A discrimination diagram plotting TiO2 against Zr for the least-altered Rhobell-related intrusive rocks, which show a progressive increase in Zr with ongoing magma-fractionation, a typical island arc progression with island arc tholeiites early in the sequence trending to more calc-alkaline compositions with time. CTG32 is an obvious outlier - in all plots - and examination of data from other studies indicates it to be probably related to the Aran Volcanic Group, with an ocean-floor basalt geochemical signature. There are other outlier intrusives elsewhere in the Harlech Dome, especially among the dykes, some of which are cleaved but others not. A detailed study is required in order to sort this out: that a probable Cenozoic basalt dyke has been found in Coed y Brenin suggests members of this relatively young suite may also be present elsewhere. At least three phases of igneous activity are represented within the greater area

Another example was of the Magnificent Uralite Porphyry which showed that in it’s altered form some elements remained stable but there had been a decrease in calcium, sodium and phosphorus and an increase in potassium. This was also related to changes in the trace elements in that there was an increase in rubidium ( related to potassium) and a decrease in strontium ( related to sodium).It also appeared that the altered rock had the heavy rare earths stripped out.

This was a most interesting talk and took us into a field we rarely delve into.