"Elan Valley dam construction and the Birth of Engineering Geology.”

At our March indoor meeting on Wednesday the 20th, guest speaker, Prof. Michael Rosenbaum, gave us a talk on "Elan Valley dam construction and the Birth of Engineering Geology.”

As a result of rapid industrialisation and urbanisation of the area in the 1860s and 70s, the populace in Birmingham was largely housed in crowded tenements in insanitary conditions. Shared privies were the rule with seepage into the shallow wells owned by the water companies. The only surface water resource was the diminutive and polluted river Rea which now flows through a ditch underneath Digbeth.

Water was very short and rationed, with drinking water sold from a pony and trap. Water-borne diseases such as cholera and typhoid were rife and something had to be done to improve the health of the workforce.
The then mayor, Joseph Chamberlain, a self made man who had made his fortune as a screw manufacturer, took action. He forcibly bought up the water companies and appointed Robert Rawlinson as consultant.

Providing an adequate clean water supply was fraught with difficulty. With no adequate local river or aquifer, water would have to be found at a distance and transported. Looking at the significant rivers surrounding Birmingham, going north, the Trent was of poor quality, the Derwent required an aqueduct and pumping, in the west the Severn was too low and the Teme had too many people and high quality farms requiring compensation. The Wye was low and people in Hereford would object, so although distant, the The Elan, with the Claerwen, were selected as most suitable. They had a large catchment area with a high rainfall and enough elevation to avoid pumping. 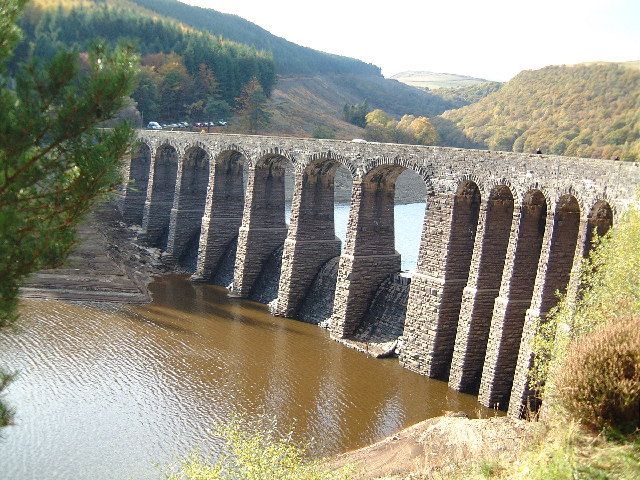 In 1890 an act of parliament was obtained and Mansergh was engaged as engineer who designed the Elan scheme with a dam at Caban Coch where the valley was constricted. Much of the local stone was called "Cyclopian" as it contained large hard cobbles and could not be accurately shaped. Accordingly, the construction of the dam was with a core of rough irregular local stone blocks, set in concrete with an Ashlar facing of accurately cut stone ferried in from a distance. This was one factor which caused a 50% cost overrun.

We were shown a remarkable 1892 photograph of Mansergh heading a group of the "great and the good" geologists and engineers on a viewing field trip. It included Prof. Topley (Surveyed the Weald), Prof. Boyd Dawkins, Thomas Hawksley (engineer for the Vyrnwy dam), perhaps showing an early merging of geology and engineering disciplines into engineering geology.
Members were treated to an interesting evening, being given an insight into the basic structure of an iconic local heritage site.

The next meeting will be on Wednesday 17th April when Daniel Lockett will give a talk on the FISH (Fossils in Shropshire) project.