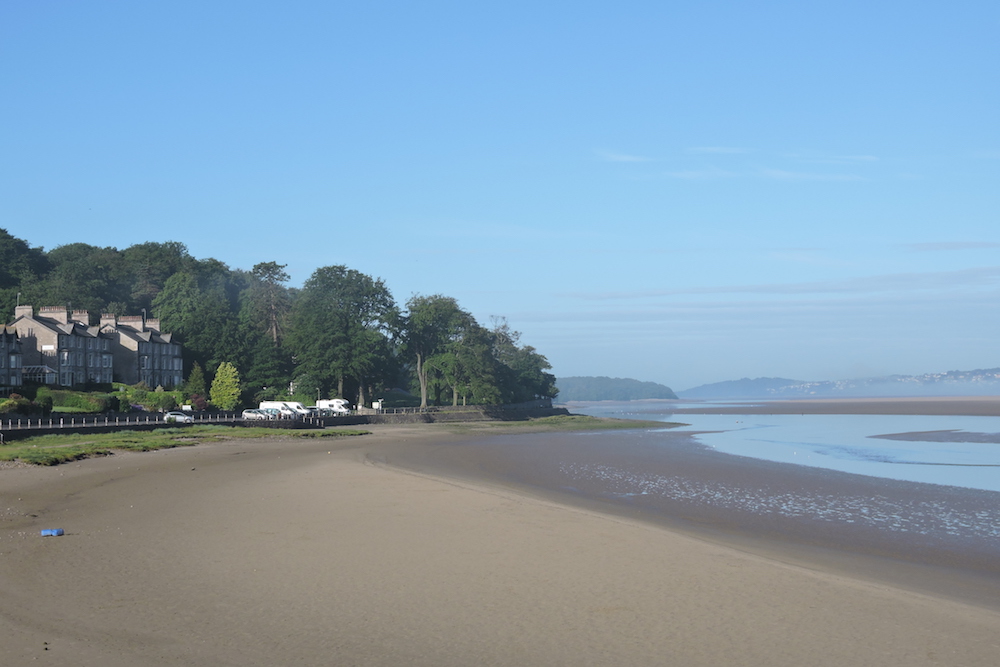 Twenty members enjoyed the 2015 Summer Weekend at Arnside, north east Morecambe Bay, on and around the beautiful estuary of the River Kent (the yellow sand came up on the tides, not down the river). Several members of the Westmorland Geological Society acted as leaders. We were on the southern side of the estuary; the river forms the south-east boundary of the Lake District National Park, the hills of which could be seen in the distance.
The Lower Carboniferous limestones are underlain here by older Silurian rocks outcropping around Kendal to the north, and were once overlain by younger Carboniferous Millstone Grit now outcropping around Lancaster to the south. These Dinantian rocks were deposited mostly as carbonate muds, with both oolitic and shelly content. We examined three of the six Dinantian sequences laid down during the period 360 to 325 Ma, in descending order: Urswick, Park & Dalton Limestones. Each was formed by a cycle (a mesothem) of sea level fall (regression), exposure of the limestone, erosion, and then sea level rise (transgression) to a maximum. Global sea level rose in the the early Carboniferous; the periodic regressions were caused by subsidence during crustal extension. The widespread carbonate platform – extending to eastern Poland at the time – forms some good building stone, the Urswick Limestone in particular is a well bedded grainstone (grainy and without lime mud). Around Arnside there is almost no brick, even in modern buildings.

Group discussing iron mining at one of the adits 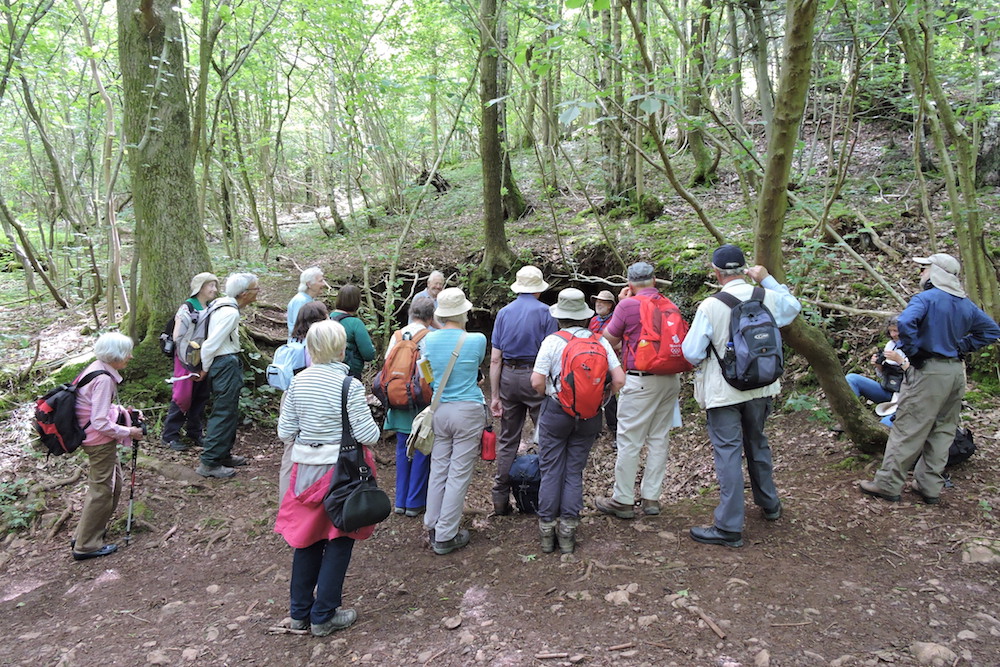 Saturday began at Arnside Knott (SD 4499 7737) with landscape interpretation followed by a walk down the hill to the coastal section, on the way observing the hematite adits. Iron was deposited in faults from hot mineral-rich fluids replacing limestone, possibly during the Cretaceous; and exploited by local iron works. We saw a dolomitised quarry in the Red Hill Limestone Fm, lying below the Dalton Lst in the same mesothem. The coastal traverse extended from the Dalton Lst, which makes a tolerable building stone, up-sequence through the fractured and rubbly-looking Park Lst, deposited in shallow water, a poor building stone containing more lime mud; and up again into the Urswick Lst. Each formation is c150 metres thick. The very open folding is clearly visible along the coast, when viewed from well out on the sands. Faulting and fault breccia are noticeable. Red hematite shows in faults. Lunch (SD 4375 7667) was on a high bank over the sandy beach. In the afternoon on the Urswick Lst wave-cut platforms [447 762] we saw abundant large syphonophillia solitary corals, and syphonodendron colonial corals, the latter apparently all upside-down as a result of breaking off during storms and resting top (ie wide side) upwards. 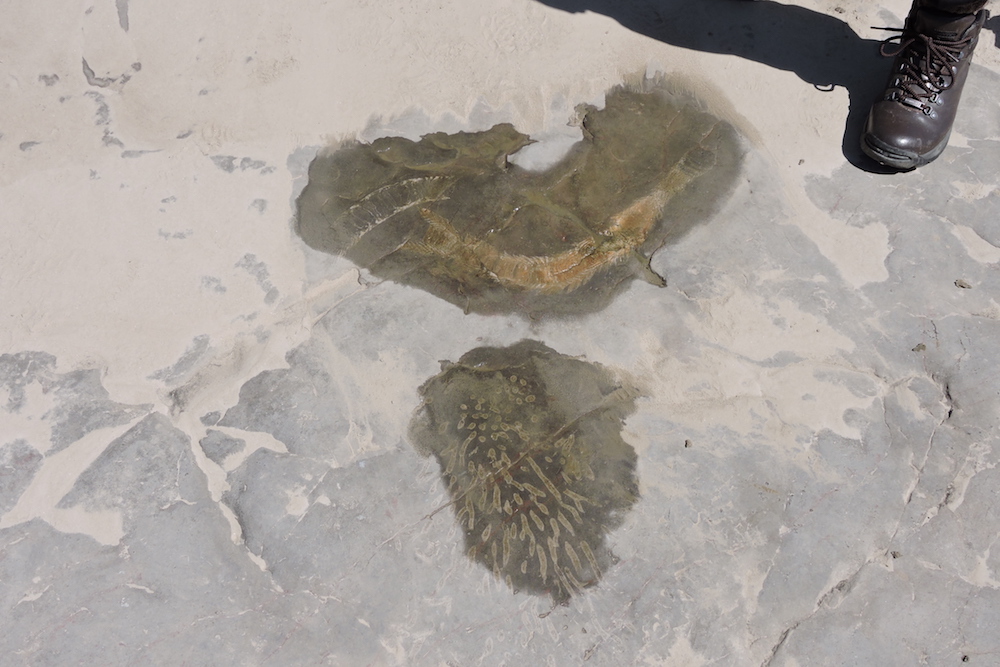 Sunday began in the rain with a walk west along the waterfront from the hotel to discuss an unusual 50m section of highly disturbed Dalton Lst for which no satisfactory explanation yet exists. It may have something to do with the shale partings, up to 2 m thick, which lubricated the movement of the more competent limestone during the Variscan Orogeny. These shales were eroded from Silurian rocks in the Lake District. Then we drove to Sandside quarry to see the Park Lst at the entrance, with its pronounced mudstone layer, and from there to Throughs Lane, Storth. The area is much affected by the Silverdale Disturbance, a 0.5 km wide band of rock through which an earlier, underlying Caledonian fault was reactivated, passing up through the Carboniferous rocks, as a reverse fault in the Variscan Orogeny. This created a monocline (i.e. a step rather than an antiform). On the step the sequence is vertically bedded, and the Woodbine Shale, here up to 10 metres thick, in the Lower UL, has been removed by erosion, creating a deep cut, which became a road called Throughs Lane. The monocline soon disappears, probably because the land surface is tilted across the vertical plane of the step. 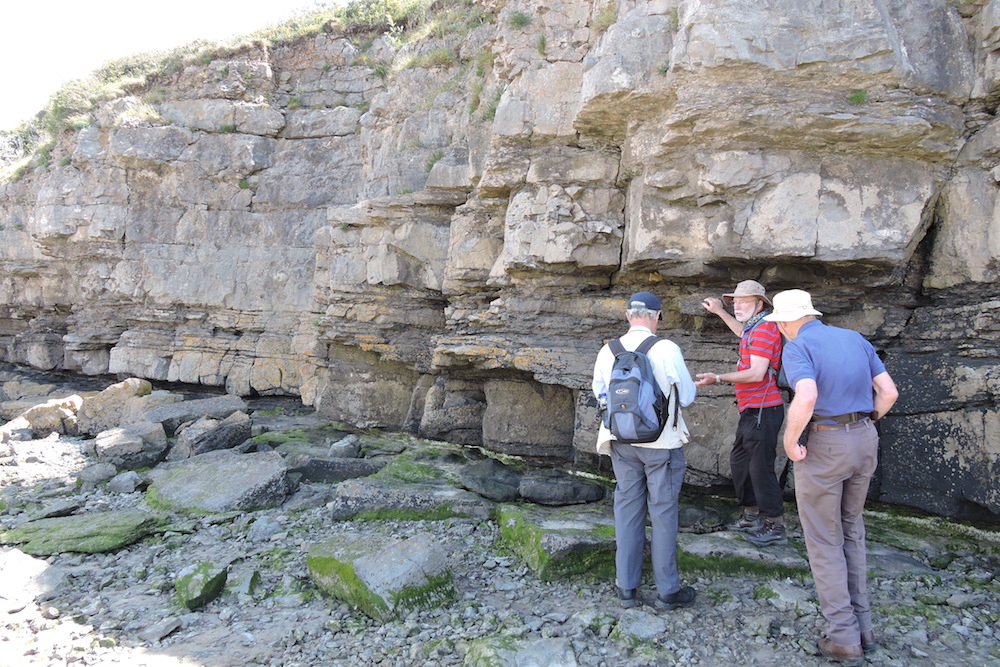 Next stop was the Ship Inn, Sandside, where an excellent lunch was laid out for us in a marquee. The afternoon session involved a walk half a mile south back along the coast road to St.John's Cross. The ridge behind is formed of Dalton Limestone and the gateposts are Urswick Limestone. A walk back up the busy road brought us to Bromersha Bay. Here we had a briefing on the structure of the district in a low lying field beside the coast road. These ‘shale hollows’ are formed where a dipping shale bed has been eroded out of the limestone. Then we made our way 500m along the former railway cutting, now a footpath, back to the Ship Inn, first in Dalton Beds and then in the Park Lst, all displayed steeply along both sides of the path. The strike of the steeply dipping beds curves sharply because of Variscan strike-slip faulting and buckling, and the lubricating effect of the evident numerous shale partings. Slickensides are pronounced and have confusingly different alignments; brittle fractures are evident, suggesting the cracking was shallow in the crust, only a few kms. At the road bridge over the footpath the pathside rock suddenly becomes more rubbly, suggesting a change from Dalton to Park Limestone, accompanied by a fault. Arriving back at the Ship Inn we said goodbye to our excellent leaders. Sunday evening (supperless after a huge lunch) was spent at Leighton Moss NSPB bird sanctuary, to have drummed into our resistant heads by Michele & Richard the names and behaviours of various wading birds. 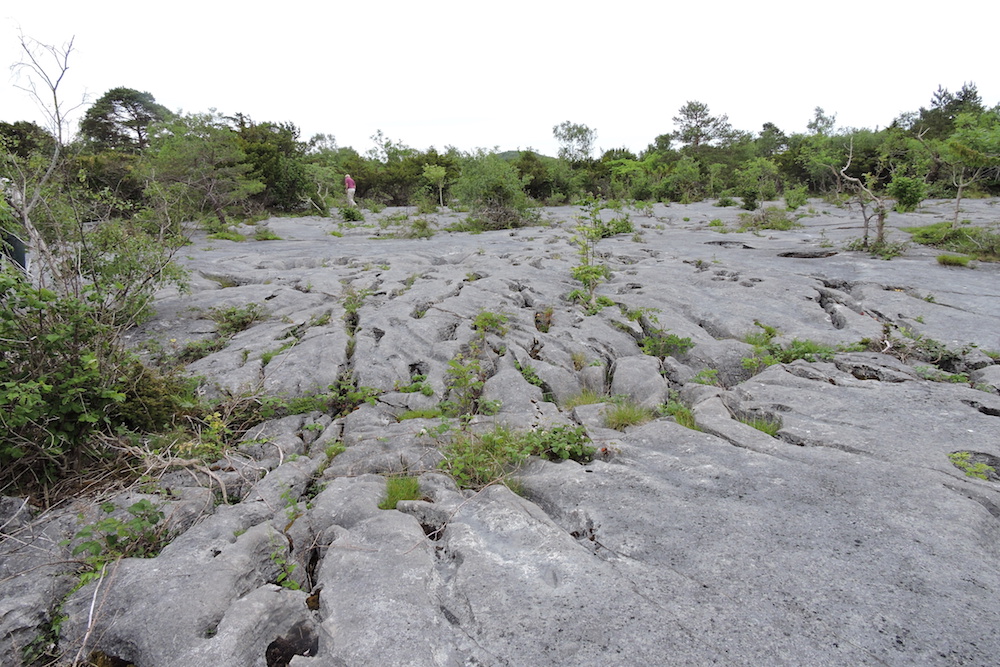 On Monday morning, as usual we led ourselves, first to Gait Barrows NNR (around SD 481 774) and some extensive limestone pavements in the Urswick Lst; quite the best we have ever seen. En- echelon quartz-veined cracking is widespread. This area, including the Yorkshire Dales has the best limestone pavements in Britain. When a horizontally bedded limestone is close enough to the surface for glacial action exactly to scrape away superficial deposit, the acid rain collects and incises the surface, particularly along the joints, leaving clints (upstands) and strongly aligned grykes (fissures). Finally we drove to Trowbarrow quarry, close to Leighton Moss. Here the vertically bedded Urswick Lst (probably on the step of the monocline) has been removed. On the west side a final few metres of UL remains, now used as a climbing wall, with the underlying fractured and rather useless Park Lst emerging behind it. On the east side a few metres of UL remains with the overlying, and also rather broken, Gleaston Fm visible behind it, the only time we glimpsed the Gleaston.