The 2014 Summer Weekend was spent near Minehead, exploring coastal sections from Kilve in west Somerset to Lynton, just over the border in Devon. Seventeen people enjoyed a long weekend brilliantly led by Chris Darmon, of Down to Earth magazine, and Geosupplies, well known as a field trip leader, and as chairman of the Youth Hostel Association, and president of Herefordshire and Worcestershire Earth Heritage Trust. We began on Friday evening with a geological briefing.

The district lies at the juncture of two different geological regions. To the west, in Devon, is rock formed from thick marine sediments deposited during the Devonian period, uplifted and folded on an east-west alignment by the late Carboniferous Variscan Orogeny. By the end of the Carboniferous period the region was mountainous and eroding. To the east, in Somerset, is younger rock, formed from Triassic and Jurassic sediments deposited by a rising sea encroaching westwards onto the eroding Devonian landscape (Carboniferous and Permian are missing in an unconformity). The lacustrine environment of the Triassic was followed by shallow marine limestones of the Jurassic. These younger rocks display a north-south alignment, overlying the east-west alignment of the older rocks.

Saturday was spent on the younger rocks to the east, around Kilve and Watchet, beginning with a single 1916 oil retort, which only briefly distilled oil from early Jurassic shales (ST 1451 4464) of the Blue Anchor Fm. Volume commercial oil extraction requires the organic content to have been matured (cooked) in situ at exactly the correct temperature: too high and it volatilises and escapes; too low and it fails to migrate to reservoirs. Bedded black shales were beautifully exposed on the beach. They smell oily when struck, and fizz furiously with acid. Sharp contacts with interbedded limestones testify to ancient sudden environmental change. Pronounced jointing shows in limestone beds but not in the incompetent shales. Loose blocks of limestone on the beach are imprinted with Psiloceras ammonites to 25 cm diameter. 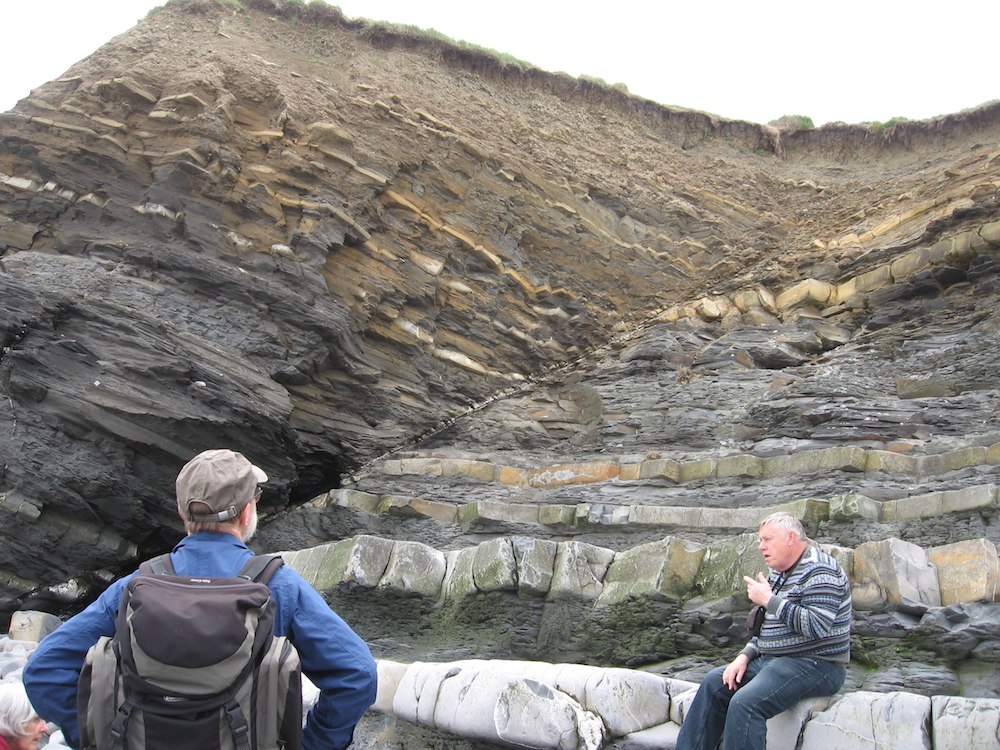 Burrows on the base of limestone beds suggest oxic bottom water. Were the shale beds deposited in deeper anoxic waters? There looked like burrows on the shale beds; if so, then sea level change did not account for the different depositional environments. Walking west (1411 4430) we speculated about reasons for these sharp alternations in lithology. One possibility is pulses of stratification anoxia during the shale intervals, caused by sudden global warming due to release of methane sequestered on the sea floor as methane hydrate. Frequent clasts of petrified wood in the limestone confirmed shallow marine conditions locally during deposition. Bedding lines on the foreshore provided geometric evidence of faulting in the limestones, and fault drag could be discerned in some cases. 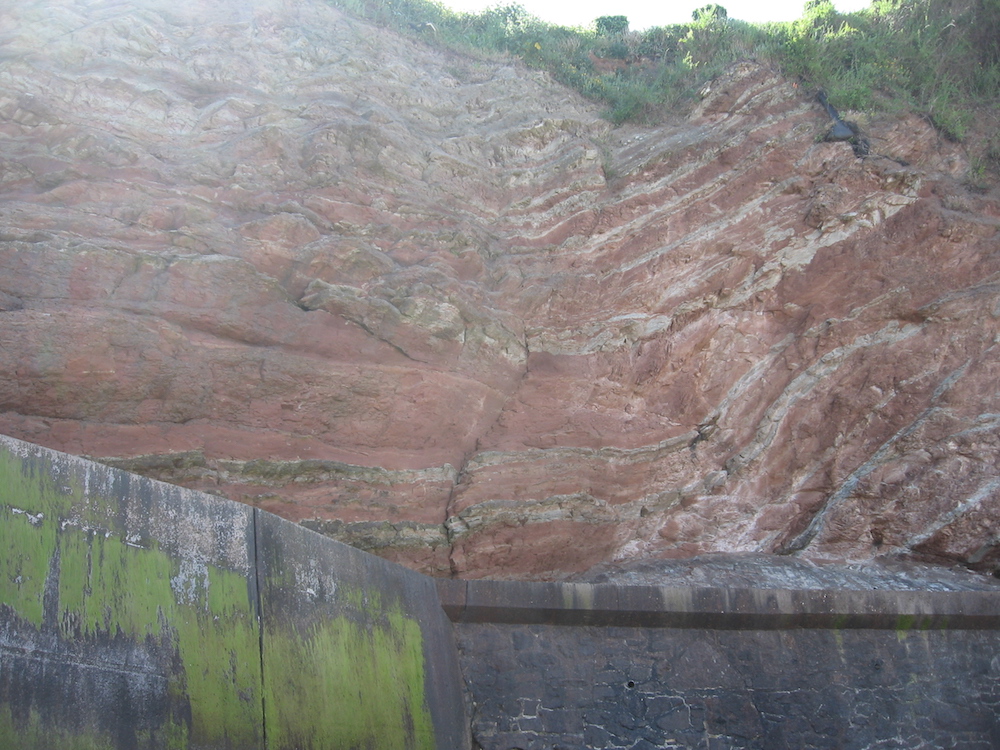 After lunch in Watchet we drove to Blue Anchor Bay (010 450). Triassic limey muds on the foreshore – the red & tea green marls - result from oxidising and reducing environments. Formed in salty playa lakes, these marls contain evaporites, here with extensive and spectacular sheets of pink alabaster (fine-grained gypsum, hydrous calcium sulphate), a secondary product of the halite crystals which would have precipitated first. The low cliffs of red mudstone, are part of the Mercia Mudstone Grp. 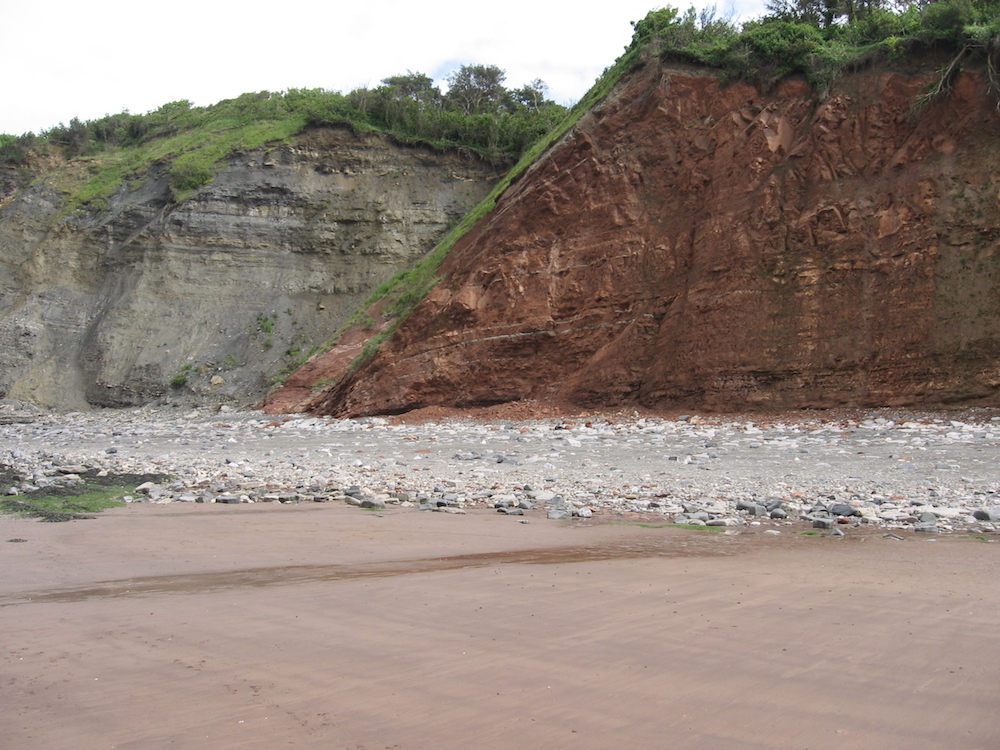 At the east end of the bay a fault places pale grey limestone beds beside this red Mercia Mudstone, with fault drag showing. Is this the Triassic/Jurassic boundary? Perhaps not, because a little further east round the corner is more gypsum, suggesting that we are not quite finished with the Triassic. The day’s geology finished in the café at the west end of the promenade. 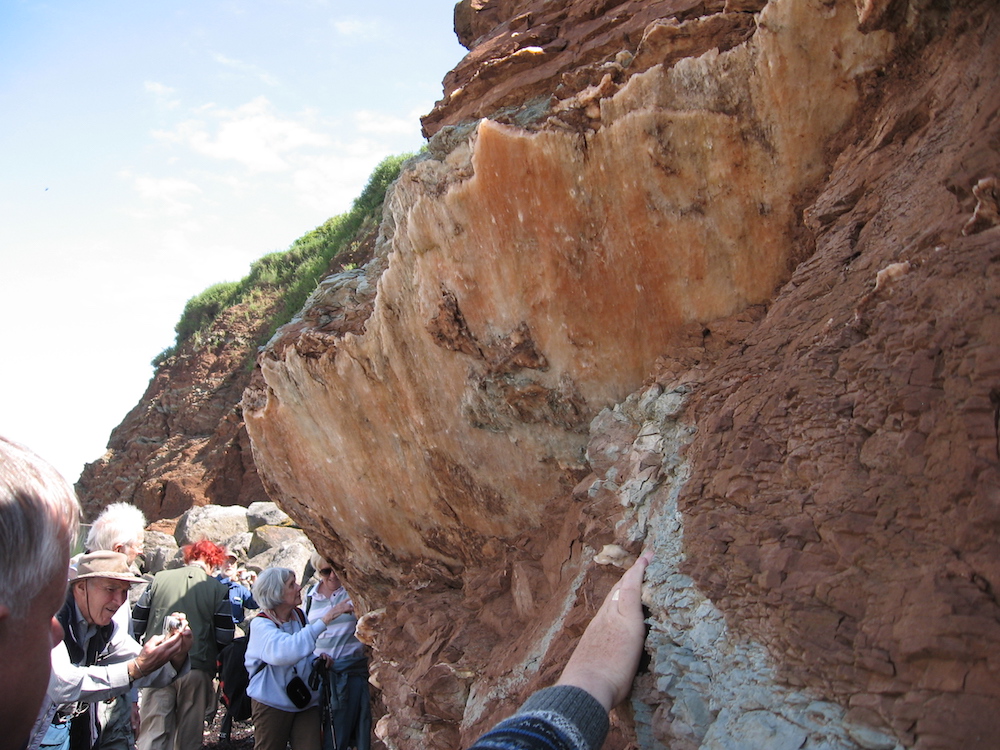 Sunday was spent further west on the Devonian rocks at Lynton, close to the fatal 1953 Lynemouth floods (car park 7108 4974). The ‘Valley of Rocks’ is a hanging valley, now mostly dry, curiously running along the coast of the Bristol Channel but a km or so inland. Originally the northwards East Lyn river failed to reach the coast and turned west to discharge a mile or two further along the coast, perhaps at Lynton, or perhaps further along at Lee Bay. Coastal erosion and glacial meltwater finally connected the East Lyn directly to the sea and left the Valley of Rocks high and dry, 145m above the East Lyn. Evidently once glacial, it ends at Lee Bay, where the base of the cliff shows an early raised beach of sand and pebbles, topped by river deposits of sand and partially rounded stone, and then by glacial head with large angular stones and a preferred orientation. This was a major fluvial and glacial discharge before the upstream end of the valley broke through to the sea. 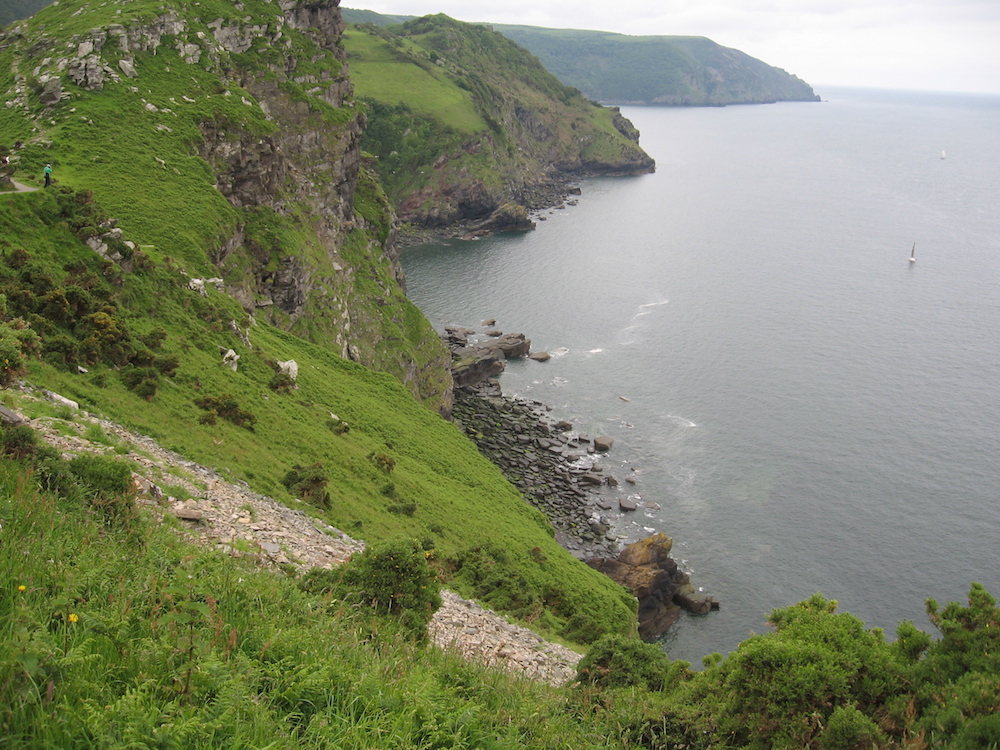 During the day we walked up the natural rock castles, noting jointing; and the cleavage in less sandy beds (7101 4991). An excellent cliff path (North Walk) along the coast was built in 1817 for the ‘genteel’. Looking north, the headland is comprised of Devonian sandstone – the Hangman Fm, extensively used as a building stone in Lynemouth. We also walked the west section of the path, noting the effect of sea level change on cliff shape, and shelly marine fossils pathside, high above the present sea. After lunch (7053 4979) we examined more tors, including Castle Rock. These tors are sedimentary, not igneous, horizontally bedded and with widely spaced joints, making them stable and erosion resistant, so they tend not to tumble, but stand high above the surrounding surface, which was carried away by solifluction during the permafrost.

Monday morning was spent in seaside Minehead, the name possibly a corruption of Mynydd, alluding to the hill on which the old town stands. Many buildings use the local stone: Devonian ORS, Permo-Triassic NRS, and Jurassic limestone. Half a dozen old lime kilns are situated near the harbour. Several times, both day and night, we looked across the Bristol Channel from Minehead and guessed at the towns we saw: Barry and Penarth slightly to the east, perhaps Porthcawl slightly west. But we were cautioned to remember that there may have been substantial Variscan strike slip along the Bristol Channel, so that the land opposite was slid into place from elsewhere.