Mid Wales Geology Club members heard an excellent talk from Professor Cynthia Burek about the Geopark on the Island of Anglesey (Môn in Welsh) on 18th May. She is a director of the Geopark and represents it at Unesco Conferences.
Geoparks became international in 2000 with several European geoparks cooperating to ensure they could protect their geological heritage and encourage sustainable development and geotourism. In 2004, the 17 European Geoparks were joined by 8 Chinese parks. 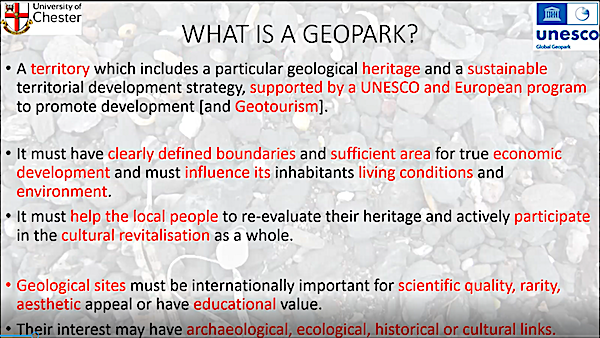 In 2015 UNESCO recognised Geoparks as one of their protected entities, joining World Heritage sites etc. A Geopark is a defined area of territory with a particular geological heritage, noted internationally for scientific quality, rarity or educational value. It also has to involve the resident population in active participation and, hopefully, economic development. By 2022, there were 177 designated Geoparks in 46 countries around the world. Europe has 88 spread around 26 countries. The UK has 8. In England: the English Riviera, North Pennines and Black Country Geoparks. In Wales: Fforest Fawr & Môn. In Scotland: Shetland and the North-West Highlands. In Northern Ireland there is the Marble Arch Caves/Cuilcagh Geopark.

GeoMôn was recognised as a Global Geopark in 2015; and recognised as the first tectonic island Geopark because it had every type of plate boundary with the associated rocks and structures. GeoMôn is the most diverse of the 8 UK Geoparks with over 100 different rock types formed over 1,800 Ma of time. Many of these rocks can be seen from the coastal path going all round the island – see the book Rocks and Landscapes of the Anglesey Coastal Footpath for details. All the main geological time periods are represented on the island apart from the Jurassic and the Cretaceous. The Geopark has produced a series of illustrated guides for walking trips to see aspects of the geology at specific locations around Môn which are suitable for both the general public and geologists.
We were shown photos of the oldest fossils in England & Wales – cyanobacteria at Llanbadrig at the Northern tip of the island – 860Ma on the latest research dating.

Llanddwyn Island, reachable at low tide from Newborough Sands, is the world type site for melange, where it was first described by Greenly. Amazingly, just a short distance away are pillow lavas formed at a constructive plate margin, rather than the destructive margin involved in the formation of a melange.
The Geopark has its headquarters in the Watch Tower Building at Amlwch, next to mica schists formed during the Caledonian Orogeny. It is open over the summer between the hours of 12noon and 4pm – but not Saturdays or Mondays. The exhibition in the building has been updated during lockdown, and the posters now cover Climate Change from Snowball Earth to modern times. Specimens of all the various rock types in the Geopark are also shown. 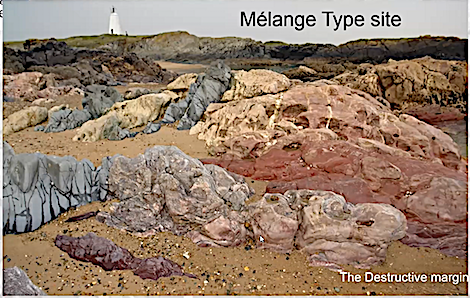 The South Stack formation rocks show the effects of the Caledonian Orogeny – Anglesey collided with Scotland and Eurasia as the Iapetus Ocean closed. This is an example of geodiversity supporting biodiversity, as the multiplicity of sedimentary rocks provides plenty of ledges for a wide variety of sea birds to nest safely.
The Geopark also features the best example of a thrust fault in Wales at Carmel Head, where Pre-Cambrian & Cambrian rocks have been thrust over the top of 450Ma Caradoc rocks.
Parys Mountain is well-known as having been the world’s largest copper mine in the 19th century. This is an area where the local geology led to economic activity significant in the UK and internationally.
All in all, there is an amazing variety and age of geological sites to see within the Geopark. Anyone interested in a good book covering the island’s rocks was recommended to buy Footsteps through Time – the rocks and landscape of Anglesey explained by Stewart Campbell, Margaret Wood and Brian Windley. Also worth visiting is the Geopark’s website: [https://www.geomon.co.uk]

Photos with kind permission of speaker