AGM followed by a talk on the Geology of Anglesey by David Warren.

Twenty six members attended the AGM which was followed by a talk on Anglesey's geology based around the geology observed during the club's annual summer weekend. The weekend was led by Dr. Charlie Bendall.Below is an outline of David's talk.

The standard view of Anglesey geology, based on the detailed work of Edward Greenly in 1919, dates from long before plate tectonics was understood. There has been much controversy about the exact chronological order of the main units, and whether they might perhaps be “upside down”.

Since 2007, some Japanese scientists, working with Brian Windley of Leicester University, have put forward a new view, where the Anglesey rocks are seen as a classic example of what happens when an ocean plate is subducted under a continental plate. The main components, including an accretionary complex, extensive mélange, an exhumed blueschist, an ophiolite sequence, and continental margin sediments, are exactly what one sees in other parts of the world where an ocean plate has been subducted. An example is the San Francisco region - as was well illustrated in Chris Simpson's recent talk to our group. As Chris pointed out, one of the key features of such a scenario is that the older units are on top, with the younger units thrust underneath - the opposite of the usual stratigraphic order!

The “Japanese” analysis is summarised in the following diagram by Professor Shigenori Maruyama, taken from my photo of the GeoMôn geopark information board at Llanddwyn Island:- 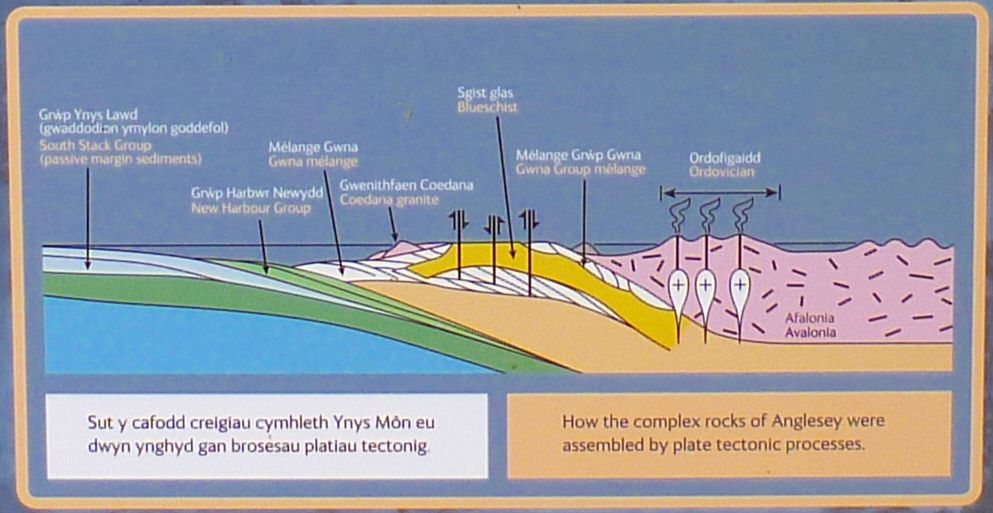 To summarise the story, around 680Ma, an oceanic plate was being subducted under Avalonia, leading amongst other things to the magmatism of the Malvern Hills. Subduction was building up an accretionary complex corresponding to the Gwna Group. The accretionary process continued over a long period of time until at least the early Cambrian.

The accretionary complex mainly consists of ocean plate sediments scraped off the descending plate by the overriding continental plate. It typically comprises a succession of small units thrust one under another in succession. Each unit, or “horse”, represents a slice of seafloor. Each typically encapsulates, at the base some pillow basalt from a mid-ocean ridge, capped by bedded chert and sometimes limestone, with possibly mudstone and turbidites on top. The units are particularly well exposed over the entire Llanddwyn island, where the Japanese scientists have mapped out 23 “horses”, which they believe represent over 7,800m of seafloor shunted into an accretionary deposit only about 300m thick.

At the core of the subduction's accretionary process is a deep oceanic trench, with a particularly steep slope on the continental side. In many situations, material tumbles down this slope, creating a chaotic mixture of various rock types, mostly derived from previously accreted seafloor, with components ranging from kilometre-scale chunks down to small pebbles. This is the famous Gwna Mélange. As I understand it, it's more likely to be the result of an ongoing process, rather than being produced by a single, huge, catastrophic event. The mélange can be seen on the north coast of Anglesey, and less dramatically at the southern tip of Llanddwyn island as well as the famous example on the mainland at the southwestern tip of the Lleyn peninsula. Returning to the detailed story of the subduction, it is thought that at around 620-600Ma or perhaps earlier, Avalonia advances to the point where a mid-ocean ridge gets subducted. Although the exact effect of such an event is unclear, it is suggested this led to the creation of the Coedana granite within the continental crust at the edge of Avalonia.

Around 575-550Ma, a ductile wedge of the accretionary complex, a few kilometres thick, gets subducted, recrystallised under blueschist conditions (high pressure but relatively low temperature), and then is squeezed back to a higher level, possibly assisted by a shallowing subduction angle. In this way, the Blueschist Unit is formed.

After the emplacement of the Blueschist Unit, the accretionary process continues, with conditions producing mélange becoming more prevalent.

During the final stages of the subduction, in the Cambrian, continental margin sediments corresponding to the New Harbour Group, and subsequently the South Stack Group, are underthrust more-or-less intact into the base of the accretionary complex. This underthrusting leads to doming of the already accreted complex, causing a fragment of the western margin of Avalonia containing the Coedana granite to become separated from the rest.

At some point after the New Harbour Group turbidites were emplaced, a deep slice of ocean crust was thrust within it - as a so-called “dismembered ophiolite”.

After subduction had largely ceased, magmatism continued into the Ordovician, resulting in the igneous rocks of North Wales. And there the subduction story ends.

In a later paper from 2013, Windley and others show that the Anglesey story is far from unique. For at least 3.8 billion years, the Earth has experienced a remarkably consistent process of sea floor spreading, subduction and accretion at continental margins. Other examples are to be found in Greenland, Central Asia, Japan, and the previously mentioned California coastal range. A further example is nearer at home in the southern uplands of Scotland, where an accretionary complex was formed on the margin of Laurentia as the Iapetus Ocean was being subducted. All of these examples show very similar rock types and structures. It appears that the overall process is a major factor in the creation of continental crust. It is even suggested it has played a part in plate tectonics being a major heat loss mechanism on Earth since the early Precambrian.