At the last meeting we were treated to a super talk given by Chris Darmon. He commenced the talk by suggesting that the traditional view of how Iceland came to be where it is is now hotly debated. He would reveal more at the end of the talk! Iceland is an island that spans the mid-ocean ridge along which the Eurasian and North American plates are moving apart. It also sits atop a mantle plume where magma upwells from from the earth's mantle ( it is this that is now in dispute). And the combination of the two are responsible for Iceland. Geologically Iceland is very young with the oldest rocks exposed at the surface between 14 and 16 million years old. It's surface is constantly changing due to rapid erosion and replenishment from volcanic action.

It is one of the most volcanic places on earth with hundreds of volcanoes many of which commence as fissure eruptions. One of the most deadly volcanoes was the eruption of Laki in 1783/4 which led to huge volumes of Sulphur dioxide being emitted into the upper atmosphere which in turn caused thousands of deaths both in Iceland an other areas of Northern Europe due to starvation and respiratory illness.

The main rock type on Iceland is volcanic and you will find pillow lavas and basalt columns. 90% of the igneous rock is basalt but there is also rhyolite, dacite and andesite present. One anomaly here is the presence of larger amounts of rhyolite compared to similar areas eg. Hawaii. Sedimentary rocks are also present and vary in type from volcanic in origin to lake, river and lagoonal. Thus there are tuffs, shales, mudstones, sandstones and conglomerates. There are even layers containing lignite and coal beds. This suggests that the environment on Iceland has been changing over time. Fossil plants are frequent and contain Angiosperms, Gymnosperms, Horsetails and many others. This suggests that the Miocene Period on Iceland was one of a humid, warm temperate climate. The decline of these species at the end of the Miocene suggests a cooling of the environment.

Most of the population of Iceland live around the coast and inland is deserted. They also make use of all the geothermal energy present for example to heat their homes. Iceland is now a very desirable destination for tourists and Chris has led tours there for the past twenty years.

At the end of the talk Chris presented some evidence to suggest that a mantle plume may not exist under Iceland.

He went on to say that Gillian Foulger found that her seismic data showed that instead of a long narrow plume of magma coming from deep below Iceland there is actually a broad reservoir of molten rock less than 400km down. This suggests that remnants of crust left behind in the mantle at the fault line have a lower melting point than the surrounding mantle. Where this ancient crustal rock crosses the ridge it should melt more than the rock around it creating a shallow reservoir of magma that feeds Iceland's volcanoes. Thus there is no need for a mantle plume.

This idea of no plume links in with much other research suggesting that mantle plumes have no need to exist to explain other areas like Hawaii. A very controversial area of geology!

Also the members evening will be on Wednesday November 19th and will be a “Mulled wine, Mince pies and Murchison” evening. 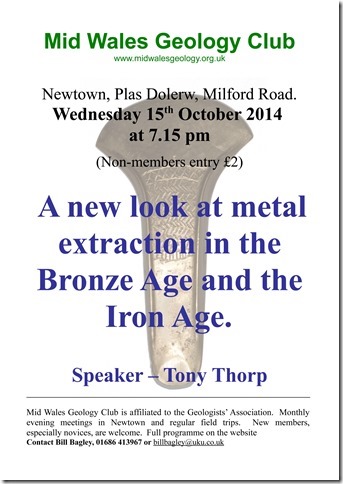