On Wednesday 16th March Tim-Holt-Wilson gave a very interesting talk entitled: " Boxstones: the Search for Miocene Suffolk. Rather than the usual summary of the talk Tim has kindly agreed that we can use the information on this subject from his blog. "Our Vital Earth"

A brown lump of sandstone, easily overlooked on the beach. The ghost of a shell impression draws my eye.

A boxstone. This is the first one I've ever found with a fossil in it. Looking closely, I see that the sea has abraded the shell's outlines, though the margins have survived better than the rest. It should be possible to identify it. 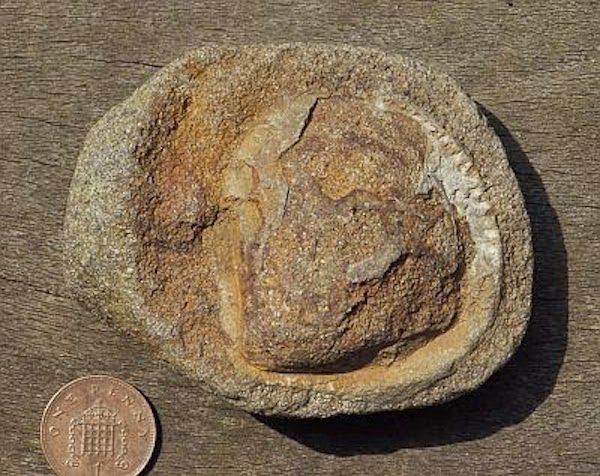 Boxstones are witnesses of a vanished world. They are all that remains of a lost geological stratum in Suffolk called the Trimley Sands, although deposits of similar age are still present across the sea in Belgium and other parts of Europe. Boxstones are nodules of phosphate-rich sandstone which may contain shell fossils and - if you are lucky - bones and teeth. Most are thought to date from the late Miocene period, perhaps 5.5 million years ago. Later, when the Pliocene sea swept over Suffolk and deposited the Coralline Crag and Red Crag (4.4 to 2.5 million years ago) it eroded some pre-existing marine beds. So earlier material got reworked into later deposits, which are - in their turn - being eroded today. The boxstone material at Bawdsey is coming from the base of the Red Crag strata in local cliffs and perhaps offshore. 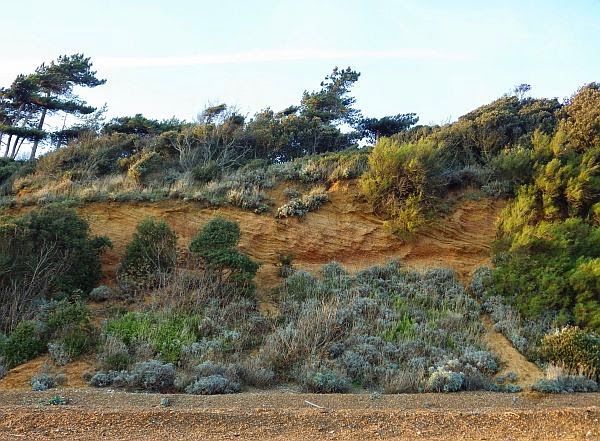 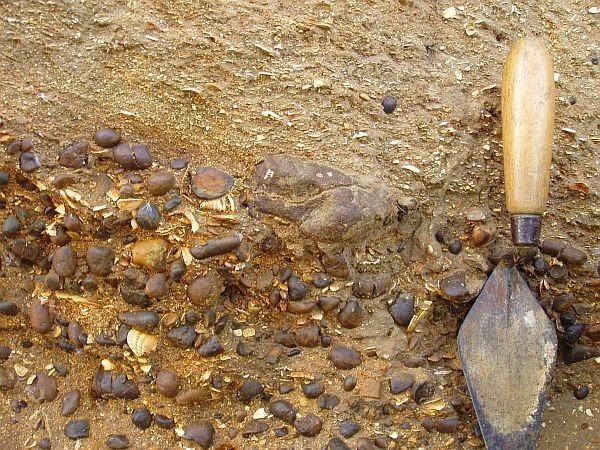 The Red Crag Basement Bed at East Lane Beach, Bawdsey. There is a boxstone in the centre of the photo. The dark brown pebbles are phosphatic mudstone.

The boxstone in my hand is a key for researching and imagining what England was like in late Miocene times. "Strata of Miocene age are very rare in Britain and none are preserved in the district".[2] Resurrecting this period will be like piecing together a jigsaw picture where most of the pieces are missing.

Also, this battered lump of rock definitely has a numinous aura for me. Hopefully I may come to understand why I think it is worth writing about.

There are a few Miocene deposits surviving in Britain, but only preserved in scattered pockets and cavities. Sands and clays have been found at the bottom of karstic sink holes at Brassington in the Peak District of Derbyshire.Blocks of fossiliferous sandstone have been found in solution pipes in Chalk bedrock at Lenham in Kent. Further afield, fossil-rich deposits in hollows in limestone at Hollymount in Ireland have been tentatively dated to the Miocene or early Pliocene. So little has survived because this period was one of crustal uplift in Britain, and erosion was active, while the North Sea was a subsiding basin area.[2] Much of Suffolk then lay beneath the waves, on the western margins of the North Sea.

My boxstone shell's habitat was evidently a sandy one, given its sandstone matrix. Some of this sand must have been washed into the sea from rivers streaming off the English land-mass, although mineral studies suggest that sediment may also have come from metamorphic rocks in the Ardennes region of Belgium.[4]The sandstone then became solidified on the sandy sea bed, along with its enclosed fossil. Deposits of a similar age have survived at Deurne in Belgium, and contain fossil shells, shark and whale bones.[5] 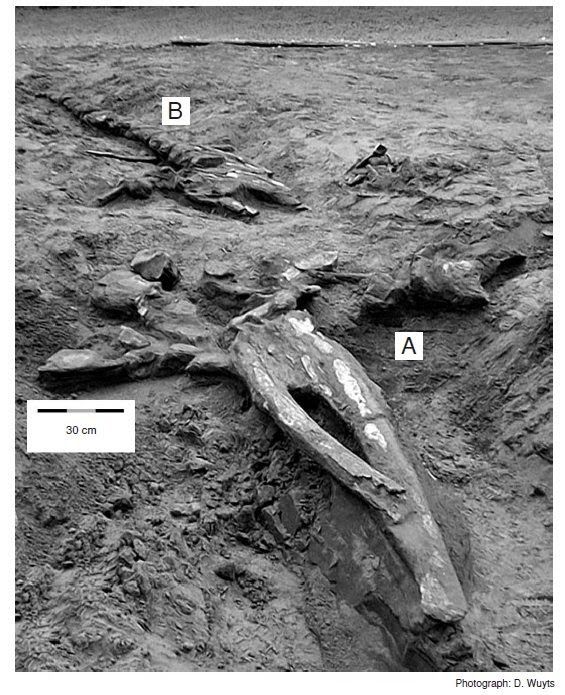 What was life like onshore in late Miocene times? The Brassington deposits contain an assemblage of plant fossils which can be used to reconstruct the climate. They suggest that the mean annual temperature was about 16ºC; by way of comparison, Suffolk today has a mean of 10ºC while Madrid has 15ºC. So we are talking about a period of warmer climate, before the general cooling trend which took place after 2 million years ago which ushered in the successive ice ages of the Pleistocene. The list of species seems to have more in common with an Asian forest garden than an English woodland. My imagination goes travelling Exotics include Cedrus (cedar), Tsuga ( hemlock), Liquidamber (sweetgum) Sciadopitys ( Japanese Umbrella pine), Symplocus (sweetleaf), Cryptomeria ( Japanese cedar). The forests of Derbyshire must have been richly aromatic places. There are also more familiar British trees such as alder, spruce and hazel.The ground flora includes mosses, ferns, herbs and grasses. The salt-tolerant herbs Armeria ( Sea Thrift), and Limonium ( Sea Lavender) suggest the sea may not have been far away. Given that the Brassington site is now some 330 m (1082 ft) above sea level, this indicates how much crustal uplift may have taken place here over the last 5 million years.[6] Brassington shows just how much difference five million years has made to the geography of Britain. 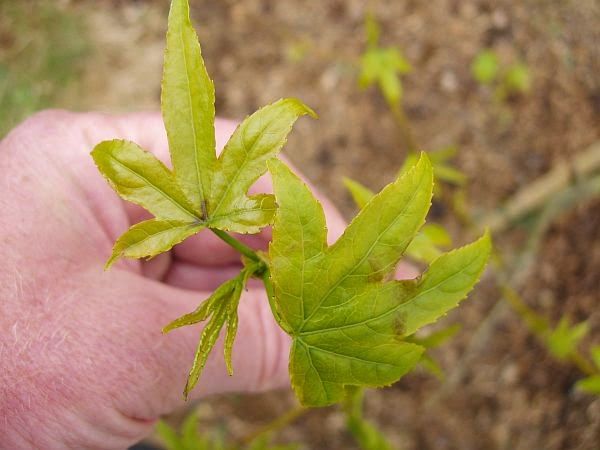 Leaves of Liquidamber from the Pliocene Project Sutton Suffolk

A few boxstones contain mammal fossils. As one would expect, marine mammals are most often represented, for example the sea cow Halitherium, the beaked whale Mesoplodon and the sperm whales Hoplocetus and Scaldicetus. A handful of land mammal specimens have been found, their bones and teeth presumably washed out to the sea. These include the elephant-like Mastodon, the ancestral pig Sus palaeochoerus and the mustelid Pannonictis.

If we want to expand this meagre evidence for land life we can turn to the fascinating Dorn-Dürkheim site in Germany, dated about 8 million years ago. Fossils have been recovered from mud in an abandoned meander of the early Rhine. A wealth of over 80 mammal species have been identified, and looking through the list of them I have a sense of a modern zoo fauna seen through the distorting mirror of time and change. The mastodon Anancus roamed the forest, along with the hornless rhinoceros Aceratherium, the horse Hipparion, the dirk-toothed cat Machairodus, the bear Ursavus and the deer Procapreolus[8] These are all extinct genera, but some Miocene mammal types have survived pretty much unchanged to the present day. I even have one of them living in my garden, the Muntjac deer, which has same the long canine teeth and prong-like horns of its ancestors from Dorn-Dürkheim. It is a native of Asia which has been introduced here and has unwittingly recovered old ground in Europe. Other Miocene descendants are living today in warmer parts of the world, where they found refuge during the cold phases of the Pleistocene or remained living in secure habitats. An example is the White rhinocerus Cerathotherium simum from Africa, closely related to the Miocene species C.neumayri from subtropical Greece.[9] Other examples are the raccoon dog Nyctereutes (a native of the Far East) and the tapir Tapirus (south-east Asia and south America). These animals remind me of the currents of evolution that flow through our present day wildlife, and which have their sources in the exotic, warmer world of the late Neogene period of Earth history. As for us, are we not the descendants of Miocene apes? 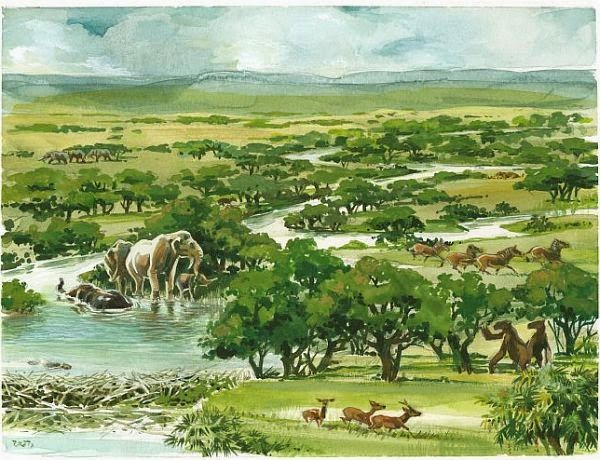 A late Miocene scene at Dorn-Dürkheim
This is an artist’s impression of how life and palaeoenvironment may have been during the late Miocene (specifically the Turolian mammal stage). A small tributary of the early Rhine meanders through a rather flat landscape covered with patches of woods and savannah. In the foreground, beavers have dammed the creek creating a small pond that stimulated a group of deinotheres to take a refreshing bath. While two chalicotheres are feeding on leaves and fruits, a group of deer is searching for shelter in the shade of trees. In the middle on the right side, a small herd of hipparions is fleeing, whereas on the far left some mastodonts are crossing a meadow. Above the deinotheres a dwarf tapir is approaching the creek, while on the right side above the hipparions a gathering of carnivores is feeding on a carcass. Painting by Wolfgang Weber. Image courtesy Franzen et al. 2013.

A Miocene scene by Mauricio Anton, showing the mastodont Gomphotherium and the rhino Aceratherium in a Spanish landscape. From the book Madrid antes del Hombre by Jorge Morales and illustrated by Mauricio Anton (Comunidad De Madrid, 2010).

I've done some research, and I think my boxstone fossil is an example of the extinct clam Glycimeris obovata ringlei, or perhaps the extinct cockle Laevicardium decorticatum. It lived and died on the seabed of the North Sea, in a moment of time well beyond human memory, even before the dawn of human awareness. Perhaps the Miocene is a metaphor for an Eden-like world before the mythical Fall of Man. If so the present Anthropocene epoch is a bitter confirmation of that Fall, as human beings para-consciously consume and abuse ever more of the world's resources. Also, perhaps my boxstone fossil reminds me obscurely of life before the dawn of my own awareness. Hence its numinous power.

Exploring this fossil's world has put me in touch with a continuum of genetic memory streaming through the world of plants and animals from the Miocene into the present. It reminds me of the biodiverse richness of the tropical parts of our planet, now threatened as never before. It reminds me of the tides of change operating on million-year timescales, transforming species and environments but also conserving elements of them. It reminds me of the fragile bubble of my own animal awareness and genetic identity which is floating - for a moment in time - on the surface of the Earth, yet part of an ancient continuum of being. In this I am no different from a mollusc which was alive 5.5 million years ago - or one alive today. 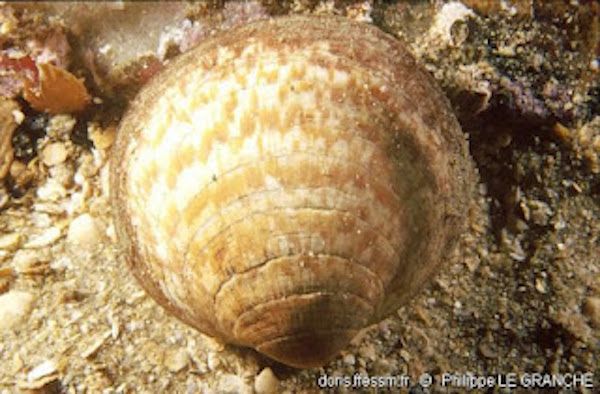